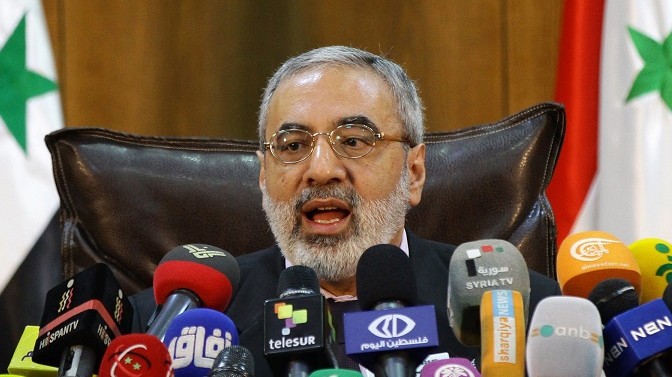 DAMASCUS – The strikes of the US-led coalition against the Islamic State (IS), in Syria are “ineffective” in halting the progress of the terror group, Syrian Information Minister Omran al-Zoubi has said.

“This coalition acts outside the umbrella of the United Nations and has launched over 1,000 airstrikes (against the IS). However, all of these strikes are ineffective in stopping the advance of Daesh,” the minister said in a recent interview.

The coalition has been carrying out airstrikes against IS positions in northern and eastern Syria since late September, but the strikes have done little to stem the momentum of the terror group.

The minister stressed that serious anti-terror efforts should take place under the umbrella of the UN and involve the governments of the terror-plagued countries.

“We cannot speak of serious anti-terror efforts unless there is a big and organized international effort sponsored by the UN where the governments of Syria and Iraq could be parts of the coalition, ” he said.

He hailed the recent agreement reached between Iraq, Syria and Iran on a continued cooperation against terrorism, saying the three countries wanted to confront terrorism militarily, economically, politically and even socially.

“Syria and Iraq are facing terrorism together for a long time and Iraq was subject to a wide-scale terrorist attack and so is Syria… Iran is a friendly country to both Syria and Iraq and it’s understandable for the foreign ministries of the three countries to meet and coordinate their anti-terror efforts,” al-Zoubi said.

The minister repeated his government’s accusation of some regional and Western countries of supporting radical groups, which led to the spread of terrorism in the region.

“I think the spread of terrorism is a natural thing in light of the large financing operations (of the terrorists in the region) in addition to the mobilization and the training of the armed men and their movement from one area to another in the world,” he said.

The minister said “terrorists are now coming to Iraq and Syria from all over the world but this process surely means that those terrorists could go back to other parts of the world and could be creating tension hotbeds.”

Asked about the fresh initiative of the new UN envoy to Syria, Staffan de Mistura, who has recently proposed freezing the battles in Syria’s northern province of Aleppo, the minister said the Syrian leadership “was clear when it said that it was going to study this proposal and that means that the Syrian leadership was dealing positively in principle with the concept of freezing the battles…”

He added, however, de Mistura’s plan has no “specific details” so far, saying that “we are waiting for Mr. de Mistura to put forth his vision about freezing the battles and its meanings and implications, and in light of what Mr. de Mistura would put forward, we can say that there would be a stance of the Syrian leadership.”

Meanwhile, al-Zoubi hailed the Russian stance on finding a political solution to the Syrian crisis, particularly the recent Russian efforts to hold a dialogue between the Syrian government and opposition parties in Moscow.

“Russia is a friendly country that has exerted big efforts during the last period of time to help end the war against Syria,” he said. “The Russian friends, along with us, think that the concept of dialogue could open a wide door for ending the Syrian crisis.”

The minister also wished that next year would be better than the past few years, saying “the Syrians paid steep prices with their blood and livelihoods while facing the circumstances of the crisis and the terrorism.”

“We wish we could bypass these circumstances for the country to return to what it used to be and become even better,” he said, adding that “the political solution is a standing choice that we haven’t stopped talking about or working for.”

The years-long Syrian crisis has become more complicated as radical groups capitalize on the chaotic situation to achieve territorial gains. It has killed more than 190,000 people and forced millions of others to seek refuge in neighboring countries.