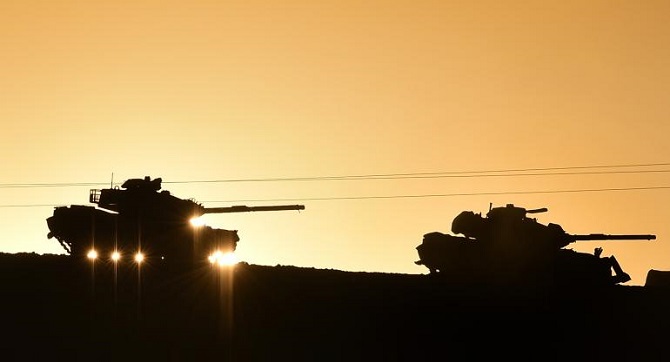 The Turkish military has launched an operation to evacuate troops guarding a tomb near the border town of Kobani in Syria, Turkey’s state-run TRT television broadcaster reports.

The Turkish Army launched a military operation into Syria to evacuate soldiers guarding the Tomb of Suleyman Shah, which has been besieged by Islamic State militants, and moved the tomb across the border into Turkey, an official and Turkish news media reported on Sunday.

The military then destroyed what was left of the site to prevent the militants from using the enclave, and one soldier was killed by accident during the operation, CNN Turk said Sunday, citing military officials.

The operation, called “Sah Firat,” began on Saturday and involved a large convoy of tanks and other heavy weaponry that entered Syria through Kobani, the Kurdish territory in Syria that has recently been freed of Islamic State militants in an American-led military operation, according to the Turkish newspapers Milliyet and Yeni Safak. The reports were pulled from the Internet almost immediately after being posted.

On twitter, Turkey’s prime minister said his country had pulled out troops protecting the tomb of Suleyman Shah, the grandfather of Osman I, founder of the Ottoman Empire

The operation aims to evacuate stranded Turkish troops who have been guarding the tomb of Suleyman Shah, the grandfather of the founder of the Ottoman Empire. Despite being located in Syria, the tomb is considered to be Turkish territory, as a result of a 1921 accord Turkey signed with France.

The operation was conducted in cooperation with Enver Muslim, the leader of the Syrian Kurdish group in control of Kobani, the New York Times reported.