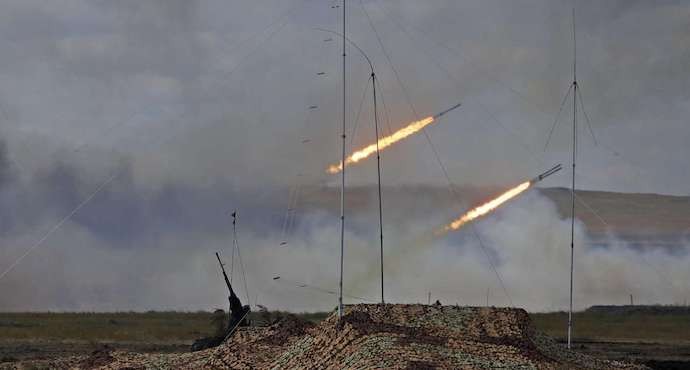 Russia’s armed forces deployed 1,000 aircraft, 36,000 tanks and armoured vehicles, and up to 80 ships in the week-long drills.

The maneuvers from 11 to 17 September in Eastern Siberia and the Russian Far East take place at a time of heightened tensions between Russia and NATO.

The biggest display of military force and mobilization of troops by Russia since the height of the Cold War has been condemned by NATO as a rehearsal for “large-scale conflict”. However, Moscow said the exercises were purely “defensive in character”.

Thousands of Chinese and Mongolian service personnel are also taking part in the Vostok 2018 drills, set to include “massive” mock airstrikes and the testing of cruise missile defence systems.

Hundreds of Chinese armoured combat vehicles, attack helicopters, fighter jets and thousands of soldiers take part in the biggest military exercise in Russia since 1981, in a show of strength and friendship between Asia’s two largest military powers.

China sent 3,200 troops, 900 tanks and 30 jets and helicopters as it takes part in the exercises for the first time, in an indication of a significant geopolitical shift in the region.

Ahead of the drills, Russian president Vladimir Putin also met his Chinese counterpart Xi Jinping in the eastern city of Vladivostok and told him the two countries relations were based on trust “in the sphere of politics, security and defence”. Russia participates in its biggest military exercise together with China and Mongolia in Vostok 2018.