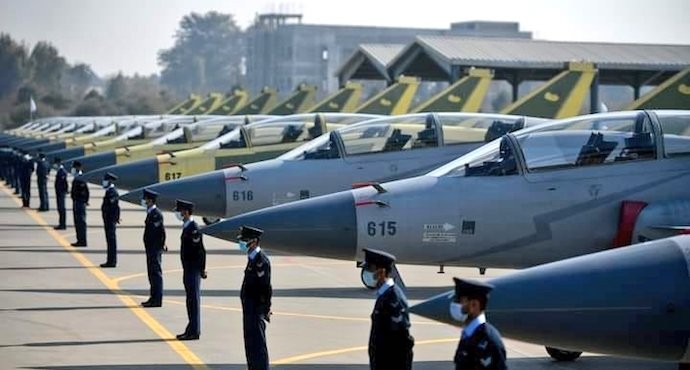 The Block III is the “most advanced JF-17 variant and represents the cutting edge aerospace technology” which will significantly improve PAF’s air defense capabilities.

Pakistan’s air chief commended the efforts of Pakistani engineers who completed this year’s production targets despite COVID-19 challenges. He also hailed the collaboration between the aviation industries of Pakistan and China.

The newly inducted dual-seat JF-17 aircraft are “fully mission capable for the entire spectrum of combat operations and will boost PAF’s operational readiness besides fulfilling the training needs of PAF” the official statement said.

The production of new fighter jets is part of PAF’s modernization program to bring Pakistan’s air fleet at par with its arch-rival, the Indian Air Force, which has more than 2,000 aircraft as compared to the PAF’s current strength of over 900 aircraft and helicopters. India this year received the first batch of five Rafale jets from France after years of delay.

The jet’s multi-roles include use as a JF-17 conversion trainer, Lead-In Fighter Trainer (LIFT), reconnaissance aircraft and ground-attack aircraft. The advanced fighter jet will include: