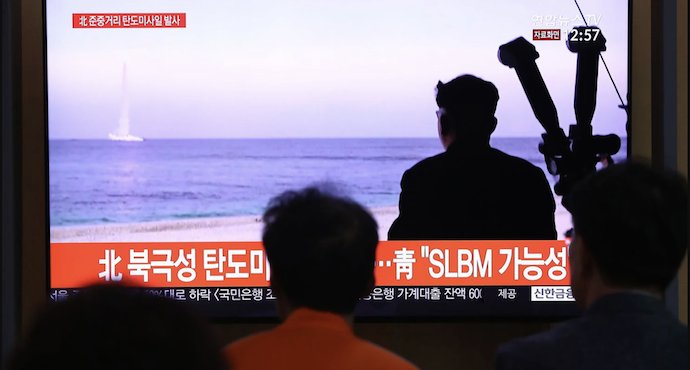 North Korea has fired a ballistic missile days before resuming nuclear talks with the U.S.

North Korea test-fired a ballistic missile on Wednesday – possibly from a submarine – days ahead of the expected resumption of nuclear negotiations between the U.S. and North Korea.

South Korean military officials wouldn’t officially disclose whether the missile was fired from a submarine or another possible platform.

South Korean officials and military experts suggest that North Korea may have tested an underwater-launched missile for the first time in three years. Launching from a submarine means it can evade detection more easily than land-based technology.

The North Korea missile flew about 450 kilometers (280 miles) at a maximum altitude of 910 kilometers (565 miles) after liftoff from an unspecified place in the waters off the North’s eastern coastal town of Wonsan, Seoul’s Joint Chiefs of Staff said in a statement. South Korean and U.S. intelligence authorities were analyzing more details of the launch, it said.

The ability to reliably launch ballistic missiles from submarines would significantly expand North Korea’s military options, enabling it to deploy missiles far beyond the Korean peninsula and giving it a “second-strike” capability in the event of an attack on its military bases.

“The North is trying to convey a message that time is not on the side of the United States and that it could take a different path if the working-level talks don’t go the way it wanted,” according to Du Hyeogn Cha, a visiting scholar at Seoul’s Asan Institute for Policy Studies.

In a statement issued by a State Department spokesperson, the U.S. called on North Korea “to refrain from provocations, abide by their obligations under UN Security Council Resolutions, and remain engaged in substantive and sustained negotiations to do their part to ensure peace and stability on the Korean Peninsula and achieve denuclearization.”

The Japanese prime minister, Shinzo Abe, said he “strongly condemned” the launch, adding that it violated UN security council resolutions. “We will continue to work closely with the United States and the international community, and do all we can to remain highly vigilant and protect the lives of the Japanese people,” he added.

Nuclear talks between the U.S. and North Korea have been stalled since February when President Trump left early from his summit with North Korean leader Kim Jong Un. The two met again in June, in the Korean Demilitarized Zone.