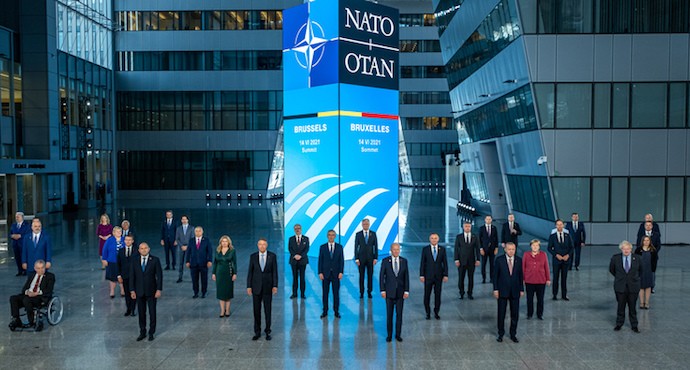 The 30-member NATO states reaffirmed the military alliance with a strong statement against Russia and also China to a lesser extent, calling out these countries over “challenges to the rules-based international order.”

For the first time, NATO described China as a security risk and moved to stand up to Beijing’s rapid military expansion and international ambitions. NATO leaders called on China to uphold its international commitments and to act responsibly in the international system. They agreed on the need to address the challenges posed by China’s growing influence and international policies.

“China is rapidly expanding its nuclear arsenal with more warheads and a larger number of sophisticated delivery systems to establish a nuclear triad. It is opaque in implementing its military modernisation and its publicly declared military-civil fusion strategy” the communique noted. It also called on China“to uphold its international commitments and to act responsibly in the international system, including in the space, cyber, and maritime domains, in keeping with its role as a major power.”

NATO summit recognized a “more assertive” Russia with “novel military capabilities, and provocative activities, including near NATO borders, as well as its large-scale no-notice and snap exercises, the continued military build-up in Crimea, the deployment of modern dual-capable missiles in Kaliningrad, military integration with Belarus, and repeated violations of NATO Allied airspace,” posing a serious threat to the security of the Euro-Atlantic area and NATO borders.

“Russia’s aggressive actions constitute a threat to Euro-Atlantic security; terrorism in all its forms and manifestations remains a persistent threat to us all,” the statement said.

In the final Brussels Summit Communiqué, issued on June 14, the Western leaders agreed to “open a new chapter in transatlantic relations,” as they face an “increasingly complex” security environment.

NATO leaders reaffirmed the alliance’s approach of dialogue towards Russia and to engage with China to defend NATO’s security interests.

They also pledged to continue to support NATO partners Ukraine and Georgia, bringing them closer to the Alliance.

“To do more, Allies agreed that we need to invest more together in NATO,” said Secretary General Jens Stoltenberg, adding that this will require increased resources across all three NATO budgets – military, civil, and infrastructure.

NATO leaders also agreed on a new cyber defense policy and made clear that the Alliance is determined to defend itself in space as effectively as in other military domains.

Addressing Afghanistan, NATO leaders reaffirmed their commitment to stand with Afghanistan with training and financial support for Afghan forces and institutions and funding to ensure the continued functioning of the international airport.