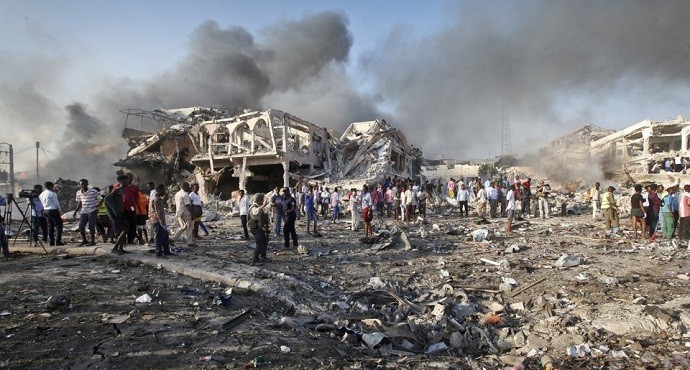 The death toll in Somalia’s worst-ever bomb attack rose to 231 with more than 275 injured, making it the deadliest single attack ever in this Horn of Africa nation.

It is feared that the death toll will rise still further after Saturday’s truck bomb, which targeted a well-known hotel on a busy street, devastating the area for hundreds of metres in every direction.

Local media reported families gathering in the area on Sunday morning, looking for missing loved ones amid the ruins of one of the largest bombs ever to strike the city.

“In our 10-year experience as the first responder in #Mogadishu, we haven’t seen anything like this,” the Aamin ambulance service tweeted.

Photos from the scene. In our 10 year experience as the first responder in #Mogadishu, we haven’t seen anything like this. pic.twitter.com/cNxeDD86u6

Many people were overwhelmed with grief. “There’s nothing I can say. We have lost everything,” said Zainab Sharif, a mother of four who lost her husband in the attack. She sat outside a hospital where he was pronounced dead after hours of efforts by doctors to save him from an arterial injury.

Dr Mohamed Yusuf, the director of the city’s Medina hospital, said his staff had been “overwhelmed by both dead and wounded”.

“This is really horrendous, unlike any other time in the past.”

President Mohamed Abdullahi “Farmajo” Mohamed has declared three days of mourning for the victims of the blast.

“Today’s horrific attack proves our enemy would stop [at] nothing to cause our people pain and suffering. Let’s unite against terror,” he tweeted.

More than 230 people have been killed in the most deadly bombing to hit #Somalia, with hundreds more injured pic.twitter.com/uvW5eLDGHi — IRIA (@IRIA_Research) October 15, 2017