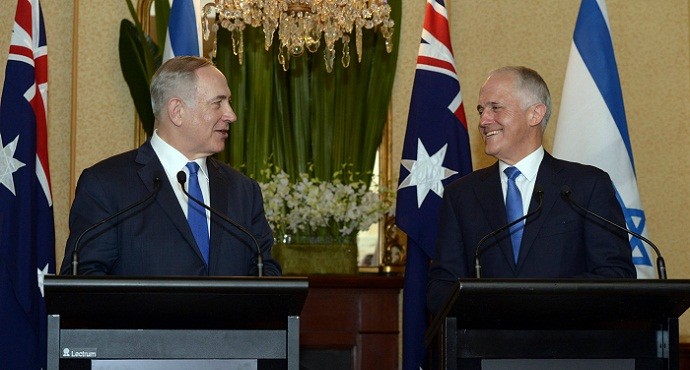 Prime Minister Benjamin Netanyahu of Israel and his Australian counterpart reaffirmed the strong relationship between their two countries as the former completed his landmark visit to the island nation.

The statement issued Thursday by Netanyahu and Malcolm Turnbull also said that “Australia re-affirmed its commitment to Israel’s right to exist as the nation-state of the Jewish people, in peace within secure borders, and its steadfast opposition to attempts to undermine Israel’s legitimacy. Both countries re-stated their support for a directly negotiated peace between Israel and the Palestinians. Australia affirmed its support for a two-state solution.”

Mr. Turnbull said “We support an outcome which has two states where Israelis, the Israeli people, the Palestinian people live side by side as a result of direct negotiations between them.”

Turnbull noted that Australia is the largest international contributor after the United States to the Western coalition fighting the Islamic State terror group in Iraq and Syria, and said Australians “recognize the importance of defeating Islamist terrorism in the Middle East and indeed around the world, for the safety of all of us.”

Turnbull further said that Israel and Australia “have the same values – democracy, freedom and the rule of law” and are fighting “the same enemies – terrorism, terrorists that seek to subvert those values.”

Mr. Netanyahu’s visit has generated some pushback here, with 60 notable Australians having signed a letter opposing it because of Israel’s policies toward the Palestinians.

“Today’s rally is to show that people in Australia vehemently disagree with our government for inviting this war criminal into country, and we stand with the victims of Netanyahu, the Palestinians who have been under occupation for the last 60 years,” One of the rally’s organizers, Damian Ridgwell told Xinhua.

Bilateral trade is currently worth about $1 billion a year, with Israel sending less than 1 percent of its exports Down Under and Australian products accounting for just 0.3 percent of Israel’s imports.

“Our trade is $1 billion. It should be at least double or triple that,” Netanyahu said