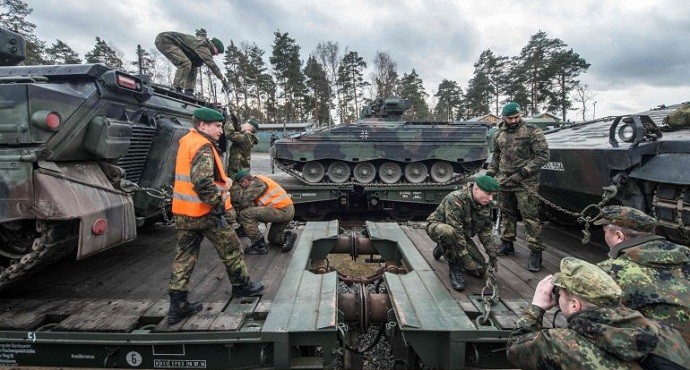 Germany will increase its number of professional soldiers from 178,000 to 198,000 by the year 2024. The announcement comes amid increasing pressure for Germany to reach its NATO-mandated defense spending target.

Germany’s Defense Ministry has announced it will increase the number of professional soldiers by around 10 percent. The Bundeswehr is now expected to grow by 20,000 soldiers to a total of 198,000 in 2024.

“The Bundeswehr is under demand like never before,” Defense Minister Ursula von der Leyen said on Tuesday, as she announced plans to increase the number of Germany’s professional soldiers from 178,000 to 198,000 by the year 2024. “In light of these increasing responsibilities, the Bundeswehr must be allowed to grow accordingly.”

Additionally, the number of civilian staff would reach 61,000 over the same period, said the ministry.

“Be it in the fight against IS (Islamic State) terrorism, in the stabilisation of Mali, the ongoing support of Afghanistan and against people smugglers in the Mediterranean and the Aegean or with our increased presence for NATO in the Baltics,” she said.

A defense ministry spokeswoman said provided the plan goes ahead, the increase would mean additional costs of about 955 million euros (£809.2 million) per year from 2024.

The Bundeswehr has been reduced in size since the end of the Cold War, but the ministry announced an end to this policy in 2016. The Bundeswehr is now expected to grow by 20,000 soldiers to a total of 198,000 in 2024.

The announcement of expansion of troops and Germany‘s increasing defense commitments is raging in the country currently.

The increase comes at a time when U.S. President Donald Trump is pushing NATO members, especially from Europe, to raise their military spending.

The new US administration under President Donald Trump has demanded that its NATO partners make a greater financial contribution towards defense. If they do not, Washington has threatened to “moderate” its defense commitments.