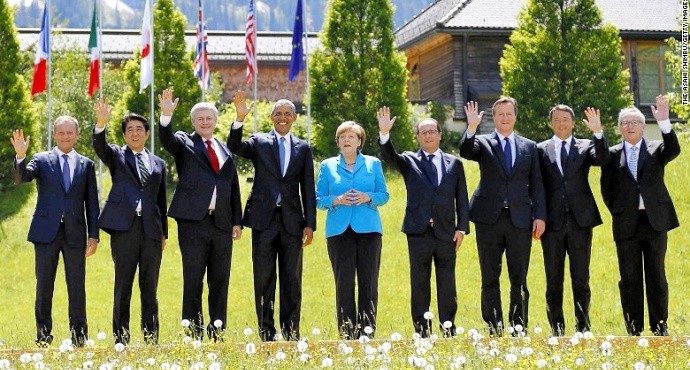 The G7 summit of major western countries has ended. While the event was overshadowed by crises in Ukraine and Greece, progress was made on climate change. Naomi Conrad reports from Garmisch-Partenkirchen.

The Group of Seven’s energy pledge capped a successful summit for host Angela Merkel, who revived her credentials as a ‘climate chancellor’ and strengthened Germany’s friendship with the United States at the meeting in a Bavarian resort.

Ties between the Cold War allies have been strained in the last couple of years by spying rows but Merkel appeared to put that behind her on welcoming US President Barack Obama, who declared their countries were “inseparable allies”.

Meeting in the picturesque Schloss Elmau at the foot of Germany’s highest mountain, the Zugspitze, the G7 leaders pressed Greece to accept painful economic reforms to resolve its debt crisis and struck a firm tone on Russia’s role in Ukraine.

They agreed that existing sanctions against Russia would remain in place until Moscow and Russian-backed rebels in eastern Ukraine fully respect a ceasefire negotiated in Minsk in February, and said they could escalate sanctions if needed. Germany’s Chancellor Angela Merkel (C) gestures while chatting with US President Barack Obama outside the Elmau Castle after an utreach meeting at a G7 summit near Garmisch-Partenkirchen, southern Germany, on June 8, 2015.

Leaders of the world’s major industrial democracies resolved on Monday to wean their energy-hungry economies off carbon fuels, marking a major step in the battle against global warming that raises the chances of a UN climate deal later this year.

The Group of Seven’s energy pledge capped a successful summit for host Angela Merkel, who revived her credentials as a ‘climate chancellor’ and strengthened Germany’s friendship with the United States at the meeting in a Bavarian resort.

On climate change, the G7 leaders pledged in a communique after their two-day meeting to develop long-term low-carbon strategies and abandon fossil fuels by the end of the century.

“We commit to doing our part to achieve a low-carbon global economy in the long-term, including developing and deploying innovative technologies striving for a transformation of the energy sectors by 2050,” the communique read.

The leaders invited other countries to join them in their drive, saying they would accelerate access to renewable energy in Africa and intensify their support for vulnerable countries’ own efforts to manage climate change.

Green lobby groups – routinely critical of the advanced economies’ record on climate change – welcomed the thrust of the summit commitments. Is Putin in pursuit of a wrong-headed desire to recreate the glories of the Soviet empire?

The leaders of Britain, Canada, France, Germany, Italy, Japan, the United States and European Union took a firm stance on Russia’s involvement in the Ukraine conflict.

Obama and Merkel both said the G7 countries were ready, if necessary, to strengthen sanctions against Moscow.

The leaders want Russia and Ukraine to comply with a February 12 ceasefire agreed in the Belarus capital Minsk that largely halted fighting in eastern Ukraine between pro-Russian separatists and Ukrainian government forces.

“Ultimately this is going to be an issue for Mr (President Vladimir) Putin. He’s got to make a decision,” Obama told a news conference at the conclusion of the summit.

“Does he continue to wreck his country’s economy and continue Russia’s isolation in pursuit of a wrong-headed desire to recreate the glories of the Soviet empire, or does he recognise that Russia’s greatness does not depend on violating the territorial integrity and sovereignty of other countries?”

Obama said Russian forces were operating inside Ukraine, something Moscow continues to deny.

In the communique, the leaders said they expected Russia to stop its support for separatist forces in Ukraine and implement the Minsk agreements in full. The sanctions, they said, “can be rolled back when Russia meets these commitments”.

The leaders discussed the Greek debt crisis as a group and also in bilateral meetings. Merkel said Europe was prepared to show solidarity if Athens implemented economic reforms.

Greece’s leftist government last week rejected proposals for a cash-for-reforms deal put forward by European lenders and the International Monetary Fund, but has yet to put forward its own alternative to unlock aid funds that expire at the end of June. The leaders of the Group of Seven, or G-7, are meeting in Bavaria, Germany, to discuss global economic and security issues, as well as pressing global health-related issues. Attendees sit on a bench outside the meeting venue of Schloss Elmau on June 8.

Among the plethora of other topics, ranging from coordinating research on neglected tropical diseases and resistance to antibiotics to empowering women, the leaders also pledged to help Tunisia better protect its border to neighboring war-torn Libya. “We’ll continue to work with our partners in Africa to get Ebola cases down to zero,” US President Barack Obama promised. G7 leaders urged Libyan factions to put down their arms and work together. “The time for fighting has passed, the moment for bold political decisions has come,” leaders said in the communiqué.

Furthermore, leaders committed themselves to furthering bilateral trade agreements, including the controversial EU-US free trade agreement TTIP. Merkel said leaders had agreed to push for “considerable progress” by the end of this year. “I intend to get it done,” Obama added.

It’s a promise that’s unlikely to please David Grube and his fellow protesters who packed their bags and left Garmisch-Partenkirchen long before the doors opened on Monday afternoon for the post- summit press conferences: When asked about his feelings on free trade, he shrugged: “There’s no need to say much, really. I mean, almost everyone’s against free trade here.” His friend nodded.

The G7 began in 1975 as the Group of Six – the United States, the UK, Italy, France, Japan and Germany – as an informal forum for leaders to discuss issues of global importance for the leading industrialized nations at the time. Canada joined the following year, Russia in 1998, thereby creating the Group of Eight. But this year, President Vladimir Putin was notably absent from the meeting, after his country’s expulsion from the group in 2014 after its annexation of Crimea.

This year, leaders discussed a broad agenda ranging from climate change, international terrorism and trade to poverty reduction. But discussions also focused on Ukraine and Russia. The leaders of the Group of Seven nations “all agree,” Merkel told journalists after the meeting on Monday afternoon that sanctions against Russia over its actions in Ukraine had to remain in place until a ceasefire in the east of the country was fully implemented. The statement led to a flurry of activity in the international press center in Garmisch-Partenkirchen. The chancellor also warned that G7 leaders were ready to toughen sanctions over Moscow’s role in the Ukraine conflict.