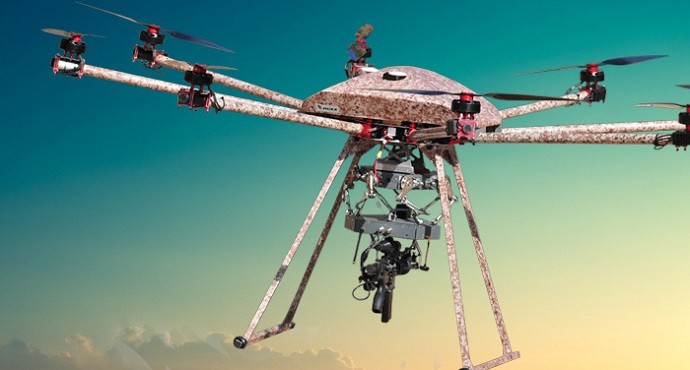 A new kind of killer drone, called the ‘the Future Soldier’, offers a glimpse into future warfare.

A Florida-based company Duke Robotics has developed a gun-toting drone called TIKAD which can carry and fire various military weapons including sniper rifle, a grenade launcher, or a machine gun.

Duke’s slogan is “no boots on the ground,” and these drones do represent a new tactical capability, a future where armed drones can do a human soldier’s job.

Termed as ‘The Future Soldier’, the fully robotic weaponry system on an airborne platform aims to save lives and to empower troops with immediate aerial support.

The small quadcopter can be equipped with an SR-25 marksman rifle made by Knight’s Armament Co.; an M321A grenade launcher; and an M4 rifle made by Colt Defense and FN America.

Duke Robotics will work with select government clients around the globe to reduce the number of deployed troops and empower troops with air-power deployment, improve prospects of mission success, minimize battlefield injuries, loss of life to friendly troops and saving civilians. Currently, the company is selling TIKAD drone to Israeli forces. Duke Robotics is co-founded by Raziel Atuar, a former Special Mission Unit commander in the Israel Defense Force. Atuar was inspired to develop this drone system after experiencing the difficulty of battling terrorist agents that operate within civilian populations.

“As a former Special Mission Unit commander, I have been in the battlefield for many years,” said Raziel Atuar, Duke Robotics CEO. “Over the last few years, we have seen how the needs of our troops in our battlefield has changed.”

The classic army versus army confrontation on the battlefield has become increasingly rare, while guerrilla warfare is now commonplace. The use of UAVs (unmanned aerial vehicles) to fire small arms from the air has not yet been a viable option until now.

“When terrorists operate, they operate from within the civilian population – preventing the military from shooting a missile into their targeted area,” said Atuar.

“The risk of collateral damage to innocent civilians is often too high. The primary solution you are left with is sending in ground troops – but this shifts the risk to your troops, which often leads to injuries and casualties. But, we thought, ‘what if…what if there was a better way’. So we created the solution — the TIKAD.”

The drone “takes the full recoil of the weapon discharge, compensates for its force and quickly readjusts to stay on target and in the fight,” the promotional video states.

Take a look at the TIKAD in action in the video below.