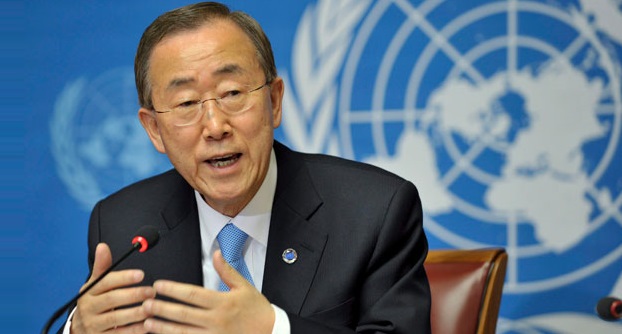 A political solution must be reached to “break this cycle of violence and fear,” Ban said ahead of his visit

The United Nations’ Secretary General is expected to the visit Middle East on Tuesday in an attempt to alleviate a deadly spiral of violence gripping the region.

The UN chief would meet Israeli Prime Minister Benjamin Netanyahu in Jerusalem as well as Palestinian President Mahmoud Abbas in the West Bank city of Ramallah during his visit.

UN Secretary-General Ban Ki-moon has sent a message to Israelis and Palestinians ahead of his surprise visit, calling for calm from both sides and stressing that violence was not the answer to resolving their differences.

“I am dismayed — as we all should be — when I see young people, children, picking up weapons and seeking to kill,” he said in a video message.

He said he also understands the need for security for the Israeli people, and that a political solution must be reached to end the violence.

In the message released ahead of his trip, the secretary general said he understands the frustration of Palestinian youth — their hopes for peace “dashed countless times,” anger over “the continued occupation” and over Israeli settlement expansion.

“I urge the youth of Palestine — as the future of your people and society — to turn your frustration into a strong, but peaceful, voice for change,” by demanding  “your leaders act responsibly to protect your future” and by demanding “progress for a political solution — from your leaders, from Israeli leaders, and from the international community.”

“I am not asking you to be passive, but you must put down the weapons of despair” he said.

He also called on Palestinian leaders to harness the energy of their people “in a peaceful way,” saying that their goals can only be achieved by living side-by-side in peace with Israel — not through violence.

Addressing Israelis, he said he understood the fears and anger felt by Israeli people due to the security deterioration, but added there was no military solution to the situation.

“When children are afraid to go to school, when anyone on the street is a potential victim, security is rightly your immediate priority. But walls, checkpoints, harsh responses by the security forces and house demolitions cannot sustain the peace and safety that you need and must have.

There is no so-called “security” solution. You – the people of Israel — as much as the Palestinian people, need to see a political horizon to break this cycle of violence and fear.

He assured the United Nations will continue to support all efforts to create the conditions for a return to meaningful negotiations.

A political solution must be reached to “break this cycle of violence and fear,” Ban said, urging both Israeli and Palestinian leaders to “stand firm against terror, violence and incitement.”

“Non-violence requires more courage and strength than violence,” he said. “At this difficult time, let us say “enough is enough.”

“Let us stop the posturing and brinkmanship.  Let us stop mortgaging the future of both peoples and the region” he stressed.

He urged all to “do not allow the extremists on either side to use religion to further fuel the conflict.” He also urged Palestinian and Israeli leaders to “stand firm against terror, violence and incitement. Demonstrate in both words and deeds that the historic status quo of holy sites in Jerusalem will be preserved” and to reaffirm their commitment to end the occupation and pursue a two-state solution by making changes on the ground.

The U.N. chief is expected to make a surprise visit to the region on Tuesday and meet with both Israeli and Palestinian leaders, according to the Associated Press.

Israeli officials said Ban, whose trip was announced in Israel only hours before his expected arrival, would meet Prime Minister Benjamin Netanyahu later in the day in Jerusalem.