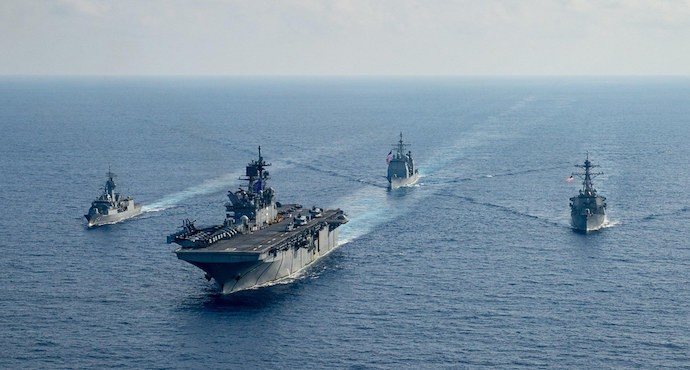 Tensions in the South China Sea rise again amid COVID-19

The combined operations started with force integration training and maneuvering exercises between Parramatta and Bunker Hill.

Rear Adm. Fred Kacher, commander of the America Expeditionary Strike Group said that the combat capability together in the South China Sea “truly signals to our allies and partners in the region that we are deeply committed to a free and open Indo-Pacific.”

The U.S. Navy also confirmed three of its warships had transited the South China Sea “in support of security and stability in the Indo-Pacific region” in a tweet earlier.

The exercise offered both navies the opportunity to integrate all warfare areas, and further strengthen the bond shared by the U.S. and Australia navies.

Thee show of force comes at a significant time when concerns about China’s increased activity in the region were reported. The Australian and the U.S. navy rendezvous was reportedly close to where the Chinese government survey ship Haiyang Dizhi 8 is assumed to be exploring for oil.

However, Chinese Foreign Ministry spokesman Geng Shuang said that an attempt of any form to “deny China’s sovereignty and interests in the South China Sea,” and “enforce illegal claims” will be “doomed to fail.”