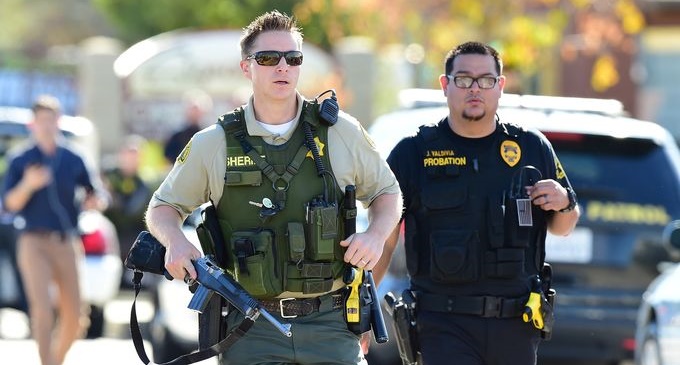 SAN BERNARDINO, (California) – Police have killed two people suspected of being involved in an attack at a social services facility in San Bernardino, California, that resulted in the death of at least 14 people.

San Bernardino Police Chief Jarrod Burguan said that suspects in a black SUV. Two suspects- a man and a woman – were dressed in what Burguan described as dark,”assault-style” clothing – had been killed in the shoot-out.

A third person was seen running from the vehicle and had been detained, Burguan said, adding that “we do not know that they were involved” in the attack at the Inland Regional Centre facility in San Bernardino.

A police officer had been injured in the gun fight but the injuries were not life threatening, the police chief said.

“I know one of the big questions that will come up repeatedly is ‘Is this terrorism?’ I’m still not willing to say that we know that for sure. We are definitely making some movements that it is a possibility,” David Bowdich, an assistant director for Los Angeles FBI’s office told reporters. A SWAT vehicle carries police officers near the scene of a shooting in San Bernardino, CA. (Photo via AP)

“It’s not a time for us to become angry but to realize there is a need to be very cautious” said San Bernardino Mayor R. Carey Davis.

If the death toll is correct, the San Bernardino attack is one of the deadliest mass shootings in modern American history — the worst since 27 were killed in Newtown, Connecticut, in 2012, according to NBC News.

President Barack Obama restated his call for more gun control reforms in the wake of the mass shooting. Speaking to CBS News, Obama said Congress should act in a bipartisan manner to close loopholes, including one that allows people on the TSA no-fly list to legally purchase firearms.

The facility where the shooting took place, the Inland Regional Center, was founded more than 40 years ago to help people with developmental disabilities.