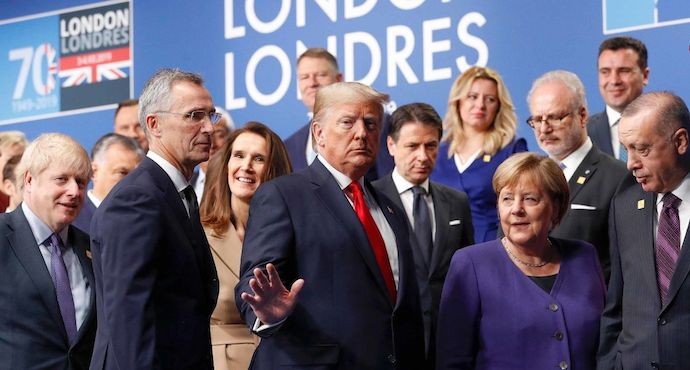 When the world’s most powerful alliance was established 70 years ago, NATO’s first Secretary General Lord Ismay defined its mission as to “keep the Russians out, the Americans in, and the Germans down.” Decades later, after the collapse of Soviet Union and unification of Germany and later its military decline, there is only the “Americans in” part that is relevant and in fact so integral that it is keeping the alliance alive. But at what cost? Americans have been complaining about spending most on the alliance and the U.S. President Donald Trump who thinks NATO is “obsolete” even discussed leaving the defense bloc altogether. Meanwhile, in Europe, the French leader proclaimed the “brain death” of the alliance and Turkey is demanding more support from NATO in Syria while the alliance could not come up with a common definition of terrorism – its current biggest threat. Amidst the internal divisions and strife so vividly on display during the NATO 2019 summit, here are the five key takeaways that describe the current focus of the group:

1. Threat from China and 5G technology

For the first time in 70 years, NATO acknowledged the challenges posed by China’s technological prowess, economic rise and military ambitions. Mentioning China’s new hypersonic missiles and intercontinental ballistic missiles able to reach Europe and North America, NATO Secretary General Jens Stoltenberg said the group is exploring ways to include China in arms control arrangements. However, he insisted that the bloc did not want to make Beijing an adversary.

European countries that found themselves caught in the crossfire between the United States and China on the 5G competition after the U.S. pressured its European allies to ban the 5G rollout by Huawei, calling it a national security risk. In the London Declaration, NATO and its allies pledged to address the new technologies, ensure the security of communication including 5G, while enhancing tools to respond to cyber-attacks. The statement, albeit lukewarm, implies that European leaders are toeing the U.S. line but still are divided whether China should be considered a threat. China’s Belt and Road initiative and ‘17+1’ framework designed for cooperation between China and Central and Eastern European countries as well as the €1.5 billion (US$1.9 million) China-EU trade highlights deepening Chinese partnership with Europeans.

While deliberating on the role of its traditional adversary, NATO members appeared deeply divided as they vowed “strong deterrence” but welcomed “meaningful dialogue” with Russia. “We believe in the dual-track approach, meaning deterrence, defense and dialogue” the NATO chief stated. The London Declaration termed Russia’s aggressive actions “a threat to Euro-Atlantic security” and said the alliance is addressing Russia’s deployment of new intermediate-range missiles. At the same time, the statement called to strive for a better relationship with Russia calling it NATO’s closest and biggest neighbor, adding that the bloc remains open “to a constructive relationship with Russia.” As French President Macron stressed for the need for strategic dialogue with Russia earlier and Germany and Italy become increasingly dependent on Russian natural gas, it is evident why the NATO members consider Russia more of a partner than an adversary.

3. Is Turkey emerging as a key NATO ally?

Turkish President Recep Tayyip Erdogan standing right beside the U.S. President Trump in the group photo at the NATO Summit in London on Dec. 4, the gestures of the two leaders and their meetings on the sidelines tells one thing: Turkey is emerging as a key NATO member at least in the eyes of U.S. French leader, on the other hand, questioned Turkey’s abstruse role after Syria offensive targeting Kurdish militias and accused the country of working with ISIS proxies, blaming the alliance for not having a single definition of terrorism to tackle the threat. Turkish leader hit back saying: “We do not know what France means for NATO but Turkey, with its second-largest army, is its most important member. If it was not for Turkey, terrorists would be heading to Europe.”

Interestingly, bloc’s three most difficult members are in fact NATO’s top three troops contributor with 1.34 million U.S. troops followed by Turkey’s 435,000 and France with its 208,000 troops rank third. Turkey’s frequent threats to open its borders and let millions of refugees into Europe and later its purchase of Russian S-400 air defense system made it a thorn in everyone’s side. The NATO chief, however, termed it “a national, Turkish decision” adding “S-400 would never be integrated into NATO” further boosting Turkey’s position in the coalition.

4. Rift between Trump and the Transatlantic allies

Since 2016, President Donald Trump has repeatedly criticized its European allies, pressuring them to increase defense spending, saying the U.S. is bearing the “biggest brunt of it”. Only nine of the 29 NATO members have met the 2 percent target while the U.S. spends about 3.4% of its GDP on defense (being a global superpower it spends far more on defense than any country in the world). In response, the NATO Sec. Gen. said, it is the fifth year of rising defense investment and European Allies and Canada have added 130 billion US dollars which they aim to rise to US$400 billion by the end of 2024.

However, the rift between the U.S. and its Transatlantic allies is becoming apparent day by day as there have been calls for the creation of a “true European army” within key NATO members. While, the U.S. may complain about having to pay most of the cost and pretend that it does not need the alliance but the fact remains that without NATO, it would have to spend billions more to maintain its global presence as a superpower. U.S. has always led the alliance both politically and militarily, leaving little hope for group’s survival on its own in the near future, as many believe there is no NATO without the U.S.

5. Can Terrorism become NATO’s key agenda and basis of unity?

At the London Summit, the European allies vowed 100 percent ironclad commitment to its key Article 5 that states that if one ally is attacked, it will be considered an attack on the whole alliance. The fact that the only time the group invoked Article 5 in 7 decades was in response to the terror attacks on the United States on Sept. 11, 2001, serves as a reminder how terror threat can unify NATO allies in times of discord.

“Terrorism in all its forms and manifestations remains a persistent threat to us all” the leaders noted in the statement. It is perhaps time for NATO to shift its focus from one country to global issues. Terrorism is a bigger threat to NATO than Russia and China, according to the French President. “Our common enemy today is terrorism, which has hit each of our countries,” Macron declared and also lamented the fact that the alliance is doing little to counter-terrorism as the group doesn’t even “have the same definition of terrorism.”

While the Central and Eastern European states may still consider Russia as top threat and others demand action on illegal migration, the global threat of terrorism may help bring the much-needed unity in the group. The resolve, capacity and means to fight terrorism, however, remain another challenge for the alliance.

Sana Jamal is an award-winning journalist who writes on foreign policy and geostrategic affairs.