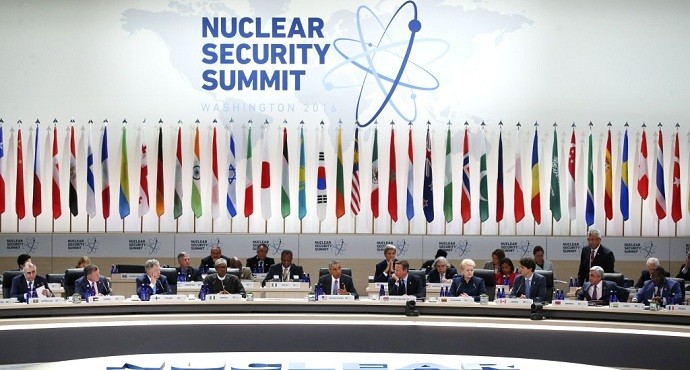 WASHINGTON (US) — “The threat of nuclear and radiological terrorism remains one of the greatest challenges to international security, and the threat is constantly evolving” world leaders highlighted, reaffirming their commitment to nuclear disarmament and non-proliferation at the Nuclear Security Summit 2016 in Washington.

The threat of nuclear and radiological terrorism remains one of the greatest challenges to international security, and the threat is constantly evolving, according to the Nuclear Security Summit 2016 Communiqué.

Nuclear terrorism threat dominated the discussion at fourth Nuclear Summit. Preventing extremists from getting their hands on nuclear materials has taken on heightened significance following this month’s attacks in Brussels. Belgian authorities found surveillance video of a top Belgian nuclear scientist after raiding the home of a suspected planner of last November’s Paris attacks.

World leaders, at agreed on the need to keep nuclear materials from terrorist groups, particularly those affiliated with the ISIS, and to support international organizations responsible for tracking the spread of those materials. That included action plans for the United Nations, the International Atomic Energy Association, a global partnership to stop the spread of weapons of mass destruction and Interpol.

“More work remains to be done to prevent non-state actors from obtaining nuclear and other radioactive materials, which could be used for malicious purposes.  We commit to fostering a peaceful and stable international environment by reducing the threat of nuclear terrorism and strengthening nuclear security” Communiqué reads.

The leaders announced multiple action plans to support international entities to strengthen nuclear security at national, regional and global levels including the United Nations, the International Atomic Energy Agency, INTERPOL, the Global Initiative to Combat Nuclear Terrorism, and the Global Partnership Against the Spread of Weapons and Materials of Mass Destruction.

The Summit gathered representatives of more than 50 nations with many high-level bilateral meeting held on the sidelines. Removing large quantities of highly enriched uranium, the material most likely to be used to make an atomic bomb, has made it harder for terrorists to get their hands on the material, U.S. President Barack Obama said at the end of his final Nuclear Security Summit.

Obama, who made reducing the amount of nuclear materials around the world one of his top priorities as president, said anti-proliferation efforts have led to the elimination of enough HEU “to create 150 nuclear weapons.”

Highly enriched uranium (HEU) has now been removed completely from “50 facilities in 30 countries,” Obama said in a news conference at the close of the summit that featured the leaders of at least 50 nations.

Obama hosted more than 50 world leaders for his fourth and final summit focused on efforts to lock down atomic materials to guard against nuclear terrorism, which he called “one of the greatest threats to global security” in the 21st century.

A boycott by Russian President Vladimir Putin, unwilling to join in a U.S.-dominated gathering at a time of increased tensions between Washington and Moscow over Ukraine and Syria, may have contributed to summit results marked by mostly technical measures instead of policy breakthroughs.

The Nuclear Security Summit 2016 provided  a forum for leaders to engage with each other and reinforce our commitment at the highest levels to securing nuclear materials. The first Nuclear Security Summit was held in Washington, DC in 2010, and was followed by additional Summits in Seoul in 2012 and The Hague in 2014.  These Summits have achieved tangible improvements in the security of nuclear materials and stronger international institutions that support nuclear security.

United Nations Secretary-General Ban Ki-moon hailed the results of the Nuclear Security Summit in Washington. However, he has urged the international community to focus more on confronting the global challenge of nuclear terrorism.

The Secretary-General outlined a number of areas where more focus is needed moving forward. Thea areas included “sustaining high-level political momentum, developing concrete recommendations on the nexus between nuclear terrorism and cyber security, and for the international community to bridge the gap on nuclear disarmament and non-proliferation,” the statement said.

Critics have pointed out that the summits have only focused on highly enriched uranium in civilian possession, which, according to the Department of Energy, only accounts for 2 to 3 percent of the world’s supply, a recent report published by The Intercept points out.

That 2 to 3 percentage is used mostly by academics for research and medical isotope production. The remaining 97 to 98 percent is held in military stockpiles, which the security summits have largely ignored. About 85% of existing nuclear materials are used in weapons and about 15% in industry.

Bruce Blair, co-founder of the Global Zero campaign to eliminate nuclear weapons, complains that “the summit virtually ignores the rest of the materials and the ways they can cause a catastrophe.”