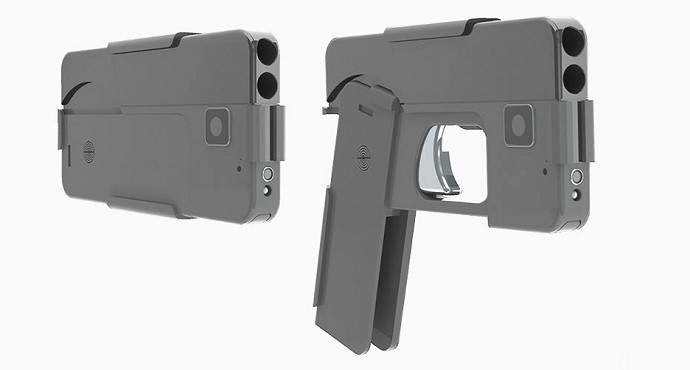 Ideal Conceal Smartphone Gun looks like a modern cell phone, but flip off that safety and it transforms into a double barrel .380 caliber pistol.

The new smartphone-shaped gun, designed by a U.S. company, has the potential to revolutionize small arms industry. The new gun hasn’t even hit the market yet and already has 4,000 orders.

Ideal Conceal Pistol – a lightwight, small, two-shot pistol – resembles smartphone that will be virtually “undetectable” in its locked position.

When in safety mode, the firearm looks like a smartphone, but flip off that safety and it transforms into a double barrel .380 caliber pistol.

“The idea follows the present-day demand for handguns that people can carry on a day-to-day basis, in a manner that makes carrying a gun easy,” said the Minnesota-based company Ideal Conceal which has designed the gun.

“Smartphones are everywhere, so your new pistol will easily blend in with today’s environment. In its locked position it will be virtually undetectable because it hides in plain sight,” it said.

The gun, called Ideal Conceal, was created by Kirk Kjelberg. “A boy spotted me in [a] restaurant and said loudly, ‘Mommy, Mommy, that guy’s got a gun!’ And then pretty much the whole restaurant stared at me,” tells Kjellberg. In order to avoid those awkward situations, he came up with Ideal Conceal.

The smartphone gun is a .380 caliber pistol that is about the size of a Samsung Galaxy S7 phone with a protective case, says Kjellberg.

However, the new gun had also raised some security concerns and triggered a debate on social media too.

The Department of Homeland Security has contacted Kjellberg about the pistol, and he plans on giving them x-rays of it so law enforcement can distinguish it from cellphones during airport screenings.

“In America, we have lots of children in contact with pistols already. There’s been quite a few incidents long before my product came along,” he said. “For me, it’s not the gun. It’s the people. So if you have a pistol and you have children anywhere near you, it’s your responsibility to lock that stuff up and keep it away from children.”

Gun sales hit a new high in 2015 in US and have nearly doubled since President Obama took office, federal data shows. The sales peaked especially after the mass terror attacks in Paris and San Bernardino.

Additional features of smartphone gun include:

The gun won’t be available until later this year and it is currently priced at $395.