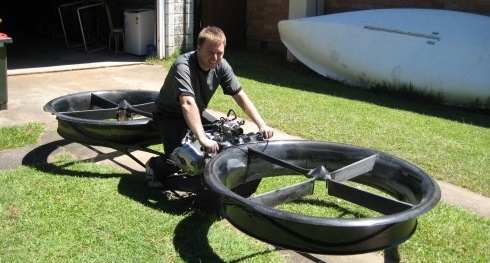 With a new military deal in near future, the hover bike may be more than a Hollywood dream.

The U.S. Army is working on a futuristic “hoverbike” that could carry one to two soldiers up to ten feet off the ground at speeds around 60 miles per hour over land and water.

The Army Research Laboratory signed a contract nine months ago with SURVICE Engineering and Malloy Aeronautics to develop a hoverbike prototype for the Army to test in three to five years.

SURVICE is based in Maryland and Malloy is based in Britain. The two companies will first develop a commercial version of the hoverbike that can carry about 250 pounds and cost about $80,000 before the companies produce a military variant, said Mark Butkiewicz, SURVICE Engineering’s manager of applied technology. He explained that the Army would like the bike to carry about 400 to 800 pounds to allow soldiers to pack their weapons and equipment on board.

The Army said the hoverbike doesn’t necessarily need a soldier on board to steer. Butkiewicz compared the commercial and the military variants of the hoverbike to the differences between the Humvee and its commercial version, the Hummer. He didn’t want to give many more details of the requirements and details of the contract signed with the Army.

The hoverbike could potentially go faster and higher but the Army wants to make sure its safe for soldiers to ride and not drifting into a helicopter’s mission set. Butkiewicz said to think of the project in some ways like a horse.

“If you fall off a horse you can get up and keep going. You can’t do that with a helicopter. That’s what we’re talking about here. Keeping it at about 10 feet off the ground, which in some ways is tougher to do,” Butkiewicz said.

ARL spokesperson Joyce Brayboy made it clear that the Hover Bike, which looks like a motorcycle whose wheels are parallel to the ground, is not intended to replace helicopters as some reports have suggested.

For now, the lab is focused on assessing the capabilities a Hover Bike might provide for the Army down the road. Although Vong would not disclose the contract’s size, which he said began roughly nine months ago, he did say the Army’s investment will increase “incrementally” as milestones are met.

The British firm Malloy Aeronautics, which designed the hovercraft, launched a Kickstarter campaign last August to fund production of a working scale model.

Vong called the Hover Bike a “Tactical Reconnaissance Vehicle” in an interview with ABC News and said the project is currently in the “proof of concept mode,” testing the feasibility of this technology.

Even before then, SURVICE was talking with Malloy, according to SURVICE Manager of the Applied Technology Operation, Mark Butkiewicz.

He explained the ARL contract is intended to build on the current prototype and “take it to the next level.” Butkiewicz said his firm has provided engineering and Department of Defense support to Malloy, helping to make the contract happen.