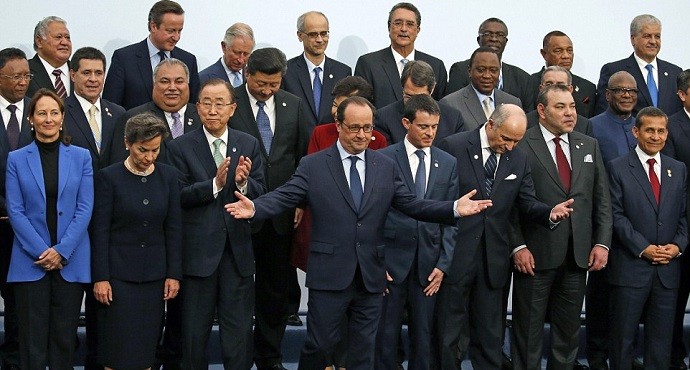 PARIS – Nearly 150 world leaders have gathered in Paris for what is being termed as a last bid to avoid catastrophic climate change after decades of struggling negotiations and the failure of Copenhagen summit six years ago. Some 150 world leaders gather at climate summit in Paris

French President Hollande told leaders that: ‘Never have the stakes of an international meeting been so high because it concerns the future of the planet, the future of life. The hope of all of humanity rests on all of your shoulders.’

In his speech, he said: “As the leader of the world’s largest economy and the second-largest (greenhouse gas) emitter… the United States of America not only recognizes our role in creating this problem, we embrace our responsibility to do something about it.” Not only was inaction likely to lead to economic damage, action to limit emissions and shift to lower carbon energy had been proved to be compatible with economic growth, he said. Chinese President Xi Jinping:
Chinese President said the climate talks must address economic differences between nations and allow different countries to develop their own solutions to the problem of global warming. “The agreement should put effective control on the increase in atmospheric concentrations of greenhouse gases and encourage countries to pursue, green, circular and low carbon development.”

“Tackling climate change is a shared mission for mankind..Let us join hands to contribute to the establishment of an equitable and effective global mechanism on climate change”

Russian President Vladimir Putin:
Russian President Putin said an agreement reached in Paris should be legally binding and should include both developed and developing nations. “We [Russia] have significantly reduced greenhouse gas emissions. At the same time we have managed to double our GDP. We have demonstrated that we can ensure economic development and take care of our environment at the same time.”

German Chancellor Angela Merkel:
“The aim of the summit was ‘a binding U.N. framework’ and a binding review mechanism to close the gap between the impact on global warming of promised measures and the work required to limit rising temperatures,” she said.

Robert Mugabe, President of Zimbabwe:
‘Developed countries are being miserly … they burden us for cleaning up the mess they have created.’

Juan Hernandez, President Honduras:
‘For Honduras, climate change is a matter of life and death. The figures don’t add up … we are not all equally responsible. ‘We haven’t come cap in hand … we come to show you how much we suffer.’

Turkish President Tayyip Erdogan:
‘The international community is on the verge of a new era in combating climate change … Our responsibility is to sign a fair, inclusive and legally binding agreement.’

U.N. Secretary Gen Ban Ki-Moon:
‘I urge you to instruct your negotiators to choose the path of compromise and consensus. Bold climate action is in the national interest of every single country represented at this conference. The time for brinksmanship is over’ UN chief said.

“We have to decide how we will be living together on this planet,” French Foreign Minister Laurent Fabius, who is also the president of the UN-brokered talks, said Sunday as he appealed to negotiators for compromise.

Many poor nations insist rich countries bear the most responsibility for tackling the problem, because they have burnt the most fossil fuels since the Industrial Revolution on their way to prosperity.

But the United States and other developed nations insist more must be done by China, India and other emerging countries, which are burning increasing amounts of coal to power their fast-growing economies. Mr. Obama met Russia’s Putin to discuss the Syrian crisis as well as the situation in Ukraine, a White House official said. He told Putin he believes Syrian President Bashar Al Assad must leave power as part of a political transition, the official said.

He also emphasized a diplomatic solution to the Ukraine crisis, adding that sanctions against Russia can be rolled back when Moscow honors the Minsk accord, according to the White House official.

President Vladimir Putin later said Russia was ready to cut its greenhouse gas emissions by almost one-third over the next 15 years compared with 1990 levels – although the fall in Russia’s economy since 1990 means that it could still increase its current emissions.

Putin made the pledge at a global climate summit just outside Paris Monday. He said that by 2030 Russia is ready to bring its greenhouse gas emissions to 70 percent of their level in 1990.