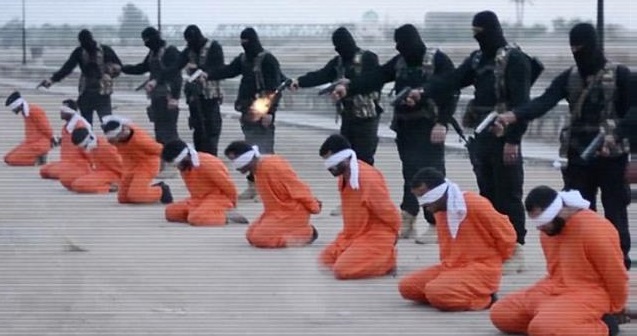 Members of the ISIS terrorist group have executed two dozen people in Iraq’s northern province of Kirkuk, as they continue committing crimes against humanity on a large scale in the crisis-stricken Arab country.

A local source, speaking on condition of anonymity, said ISIS members killed the victims in front of a large number of onlookers in the Zab district, located 95 kilometers (59 miles) west of the provincial capital, Kirkuk, on Sunday, Iraq’s al-Sumaria satellite TV network reported.

ISIS extremists had earlier abducted the men, among them members of the municipal council of the district.

The development came only three days after ISIS extremists stormed a number of schools in the al-Qayyarah, al-Shura, Badoush and al-Baaj neighborhoods of Mosul, located some 400 kilometers (248 miles) north of the capital, Baghdad, and kidnapped nearly 120 children.

On April 15, Anbar lawmaker Adel Khamis al-Mahlawi announced during a press conference that ISIS had beheaded about 300 people, thought to have mostly been from nomadic tribes in the violence-plagued area, over the past few days.

“ISIS continues in a series of terrorist crimes against the Iraqi people, especially the members of Anbar tribes,” he said, adding that the victims belonged to al-Karableh, Albu Mahal, Albu Salman, al-Ubaid and al-Raoyen tribes.

On April 11, ISIS terrorists executed more than 30 people, including women and children, in Iraq’s western province of Anbar after accusing them of cooperation with the security forces and government-backed groups.

ISIS launched an offensive in Iraq in June last year and took control of Mosul, the country’s second-largest city, before sweeping through parts of the country’s heartland.