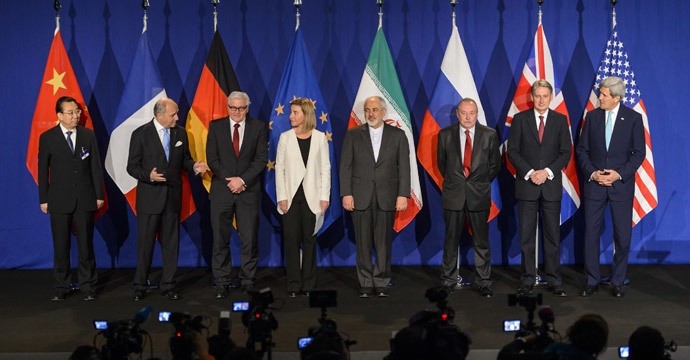 Iran and international powers have reached “solutions on key parameters” of Tehran’s nuclear program following eight-day talks in Switzerland, according to a joint statement issued by the negotiators on Thursday.

During the media conference EU foreign policy chief Federica Mogherini said the deal achieved as a result of the talks creates the basis of a future comprehensive nuclear agreement between Iran and six powers which is to be concluded by a June 30 deadline.

The agreement envisages the Fordow facility being converted into a nuclear physics center with no fissile material. It was agreed that the Natantz facility would remain as the only nuclear power plant in the country. Under the deal Tehran was obliged to refrain from creating nuclear weapons.

“An international joint venture will assist Iran in redesigning and rebuilding a modernized Heavy Water Research Reactor in Arak that will not produce weapons grade plutonium. There will be no reprocessing and the spent fuel will be exported,” according to the joint statement.

US and EU are to lift Iran sanctions after the signing of the deal on June 30 and after IAEA verification, said Iran’s Foreign Minister Javad Zarif. “It will be an end to all UN resolutions against Iran,” Zarif said clarifying the exact numbers of the documents – from 1696 to 1929.

“Iran and the US relations have nothing to do with this,” said Zarif answering a reporter’s question on the strained relations between the two countries. “We have built mutual mistrust in the past,” he said adding the he hopes “some of that mistrust could be remedied” through the implementation of the nuclear agreement.

“We have discussed a reciprocal mechanism” if there is a “material breach” or significant “incompliance” with the agreement, he said. “The elaborate mechanism will not allow excuses,” he added.

Iranian President Hassan Rouhani earlier said on Twitter that drafting of the agreement is to start immediately, with a June 30 deadline for finishing the process.

“Found solutions. Ready to start drafting immediately,” Zarif wrote on his Twitter ahead of the press conference on the results of the talks in Switzerland on Thursday.

German Foreign Minister Frank-Walter Steinmeier, who has also stayed in Switzerland, said that the framework deal with Iran is a “big, decisive step forward.”

The deal would help the security situation in the Middle East, partly because Tehran would now be able to take more active part in efforts to solve conflicts in the region, the Russian Foreign Ministry said in a statement on Thursday.

UN Secretary-General Ban Ki-moon said that the agreement brokered in Lausanne could “enable all countries to cooperate urgently to deal with the many serious security challenges they face.”

Speaking at the White House on Thursday, US President Barack Obama said that a historic deal has been reached over Iran’s nuclear deal. He said the deal is based not on trust, but on “unprecedented verification” and called it “the best deal by far.”

US Secretary of State John Kerry welcomed the deal by saying that a political understanding has been reached and it is a solid foundation for “good deal we are seeking” between Iran and world powers.

France’s Foreign Minister Laurent Fabius said that the framework agreement with Iran is a “positive step”, but questions and details still need to be resolved.