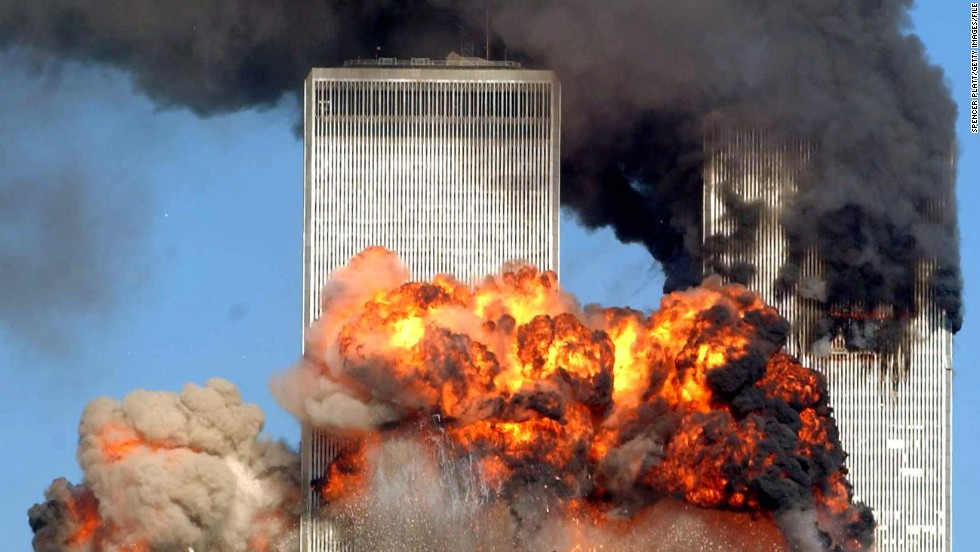 May 2 marked the five-year anniversary of the U.S. raid in Abbottabad, Pakistan, that resulted in the death of Osama bin Laden. In the wake of that operation, we noted that while bin Laden’s death fulfilled a sense of vengeance and closure for the 9/11 attacks, in the big picture, it was going to havelittle effect on the trajectory of the wider jihadist movement. A man was dead, but the ideology of jihadism was going to continue to pose a threat.

The jihadist movement has progressed closer to bin Laden’s vision for the world in the past five years than it had in the almost 10 years between 9/11 and his death. An arc of jihad now spreads from West Africa through the Middle East and into Southeast Asia. Reflecting on bin Laden’s demise provides a reminder not to lose sight of the forest — the wider jihadist movement — by focusing on the trees — individuals and groups.

Bin Laden aspired to a world ruled by a Muslim caliph who would be guided by the principles of Sharia. To get there, he envisioned the establishment of a series of Islamic emirates practicing “true Islam” that eventually would expand into a global caliphate. Until his death, bin Laden maintained that jihadists should focus primarily on attacking what he termed the far enemies — the United States and its “European crusader allies.” He believed that until they were driven out of the Muslim world, it would be impossible to establish such emirates because the United States and its allies would overthrow “true Muslim” leaders as they did Mullah Mohammad Omar and the Taliban in Afghanistan. Furthermore, unless the far enemies were stopped, they would continue to support the “apostate” governments, such as those in Saudi Arabia and Pakistan, that did not share bin Laden’s interpretation of Islam.

Bin Laden’s strategy centered on use of spectacular terrorist attacks to draw the United States into invading the Muslim world. He believed that once the United States invaded, Muslims would be compelled to join a defensive jihad to fight the “crusader armies” in a long war of attrition. Bin Laden believed that this action would lead to the collapse of the U.S. economy and government in much the same way he believed the jihad in Afghanistan had precipitated the collapse of the Soviet Union. In his plan, once the United States and its allies were defeated, local uprisings would be able to overthrow the corrupt governments in the Muslim world, clearing the way for the global caliphate to rise.

Bin Laden and al Qaeda’s early attacks against the United States such as the 1993 World Trade Center bombing, the 1998 East Africa embassy bombings and the failed Millennium bombing plot did not provoke the desired U.S. response. But the spectacular 9/11 attacks certainly struck the proper chord, prompting the United States to invade Afghanistan in 2001 and topple the Taliban government. The reaction was fierce and fast, and a large number of al Qaeda and other foreign jihadists fled Afghanistan. Many settled in the friendlier confines of Pakistan’s wild Pashtun areas, while some fled to other havens in the region. Abu Musab al-Zarqawi and his followers relocated to northern Iraq, a lawless region that had thrown off the yoke of Saddam Hussein’s rule.

But the stricken American behemoth was not finished. In 2003, the United States invaded Iraq and toppled Saddam, who had absolutely no connection to the 9/11 attacks. This proved a boon to the jihadist cause. While Afghanistan was a relative backwater, Iraq was seen as the heart of the historical Muslim world, and therefore alluring to those wanting to fight a defensive jihad. It also helped that Iraq was wedged between Iran and Syria, two countries hostile to the United States that would aid jihadists in their efforts to bleed the United States and drive its troops out of the region.

Iraq quickly became a jihadist magnet, and as money poured in, the number of foreign fighters traveling there rapidly surpassed the number that were in Afghanistan. This infusion of men and cash (Iraq was already awash with weapons) helped dramatically increase al-Zarqawi’s profile. He merged his Jamaat al-Tawhid and Jihad group into al Qaeda, but as we have noted since 2005, the marriage was precarious from the beginning.

Other jihadist groups adopted the al Qaeda ideology and even its brand name, and soon there were franchises in Saudi Arabia, Yemen and Algeria and sympathetic or aligned groups in the Philippines, Indonesia, Somalia and Nigeria. Grassroots cells and lone attackers sprung up across the globe. Some groups conducted noteworthy attacks in places such as Bali, Madrid and London. But mostly, jihadists did not make any appreciable headway and struggled merely to survive. The places where jihadists were able to thrive were mostly wild or ungoverned, such as along the Afghanistan-Pakistan border and in Somalia, the deserts of the Sahel and Yemen, and the Indonesian/Philippine archipelago. 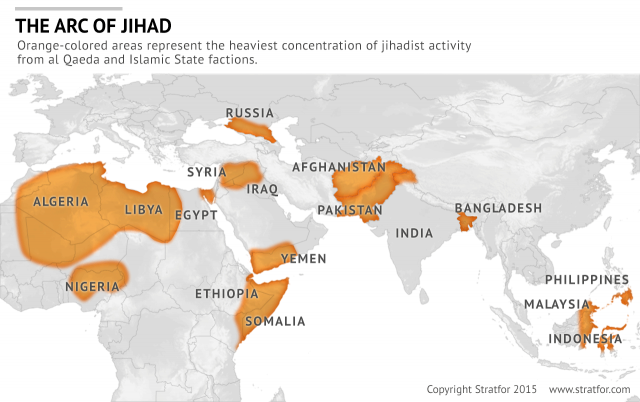 Even though al-Zarqawi’s group had proclaimed an “Islamic State in Iraq” a few months after his death in 2006, by 2010 the group had been severely damaged and was in danger of annihilation. But 2011 was about to bring dramatic change. First, the United States was in the middle of a drawdown that would remove all U.S. troops from Iraq by December 2011. Second, events in Tunisia in December 2010 sparked a regional uprising, later called the Arab Spring. The wave of protests that broke across the region would not only result in the overthrows of rulers such as Tunisia’s Zine El Abidine Ben Ali, Egypt’s Hosni Mubarak, Yemen’s Ali Abdullah Saleh and Libya’s Moammar Gadhafi, but also led to civil wars in Libya, Syria, Yemen and Mali. Even in countries such as Tunisia and Egypt where the existing order was not overthrown, the uprisings would provide room for jihadist groups to gain a foothold and grow.

But in most places, the Arab Spring itself did not inspire the growing acceptance of jihadist ideology as much as the failure of democratic reform efforts and the government counteractions that threw many into the arms of the jihadists. When nonviolent protests are met with violence, it is hard to keep protesters from responding in kind, and that is what happened in Syria, Libya, Yemen and even Iraq, where Shiite authority violently put down Sunni protests. This spiral of violence provided a recruiting bonanza for jihadist groups.

This created a no-win situation for the United States and its allies. They intervened on the side of the crowds in Libya and helped smash Libya’s army, plunging the country into anarchy as fighting erupted along regional, tribal, religious and ethnic lines. In Syria, the United States and its allies helped equip and train anti-government forces but did not directly intervene as in Libya. Nevertheless, Syria still fell into the same sort of chaos, and jihadists have benefitted greatly from the resulting civil war. Syria became such a large jihadist prize that a nasty fight erupted over who would control the jihadist movement there, leading the Islamic State to break from al Qaeda and engage it in open combat.

The division would eventually spread globally, with the Islamic State and al Qaeda each competing for primacy — and ideological control of the jihadist movement. In Libya, Somalia and Afghanistan, this struggle has shifted from ideological battles to armed conflict. In many ways this struggle mirrors those waged between Marxist and Maoist ideologues for the leadership of the communist world. It is hard to see an end to the Islamic State-al Qaeda conflict, and we are skeptical of claims that al Qaeda and the Islamic State could eventually patch up their differences and reunite.

People and governments alike tend to focus on personalities such as bin Laden and self-declared caliph Abu Bakr al-Baghdadi, and groups such as the core of the al Qaeda and the Islamic State organizations. In fact, governments struggle greatly in combatting more amorphous targets, such as movements and ideologies. But there is a danger that by focusing on the trees, one can miss the forest.

Certainly, governments must continue to apply all the tools of counterinsurgency and counterterrorism against these jihadist groups and their leadership, but it is also crucial to recognize that the world simply cannot kill or arrest its way out of this problem. The broader jihadist movement, whether inside the arc of jihad or in other parts of the globe, will continue to pose a threat until the ideology of jihadism is defeated as Marxism and Maoism largely were. The struggle is going to require strong U.S. leadership and cooperation from an array of regional allies and alliances.

Despite the internal al Qaeda/Islamic State conflict, overall the jihadist movement is larger and casts a wider shadow now than it ever has. The number of foreign fighters who have flocked to Syria, Libya and elsewhere in recent years has far surpassed the number of fighters who made similar jihad pilgrimages in past decades.

The realization of bin Laden’s dreams is nowhere close, but the jihadists’ utopian vision of a just and secure society ruled under Sharia remains especially appealing to Muslims who are living under a dictatorship, kleptocracy, or anarchy in the case of Afghanistan after the fall of the Mohammed Najibullah administration. However, this utopianism quickly fades once it meets reality. People who have lived under jihadist rule in Afghanistan, Yemen, Mali, Libya, Somalia and Syria have learned that oppression and corruption do not disappear in a jihadist society — they merely take on a new form. Jihadist polities have consequently proved to be unpopular and short-lived, and the jihadist dream of creating lasting emirates is clearly more delusional than practical.

The modern form of jihadism that bin Laden helped nurture and propagate will eventually be relegated to history’s rubbish bin of failed ideologies where it will languish next to Marxism and Maoism. But until that happens, jihadists will continue to kill and destroy, much like the communists who went before them. The death and destruction that jihadists will leave in their wake as the ideology withers will be his true legacy.

Death and Destruction: Bin Laden’s True Legacy is republished with permission of Stratfor.