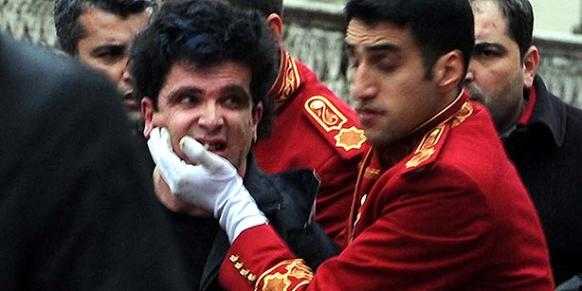 A man opened fire and threw a grenade, which did not explode, Thursday at the Istanbul offices of Turkey’s President Recep Tayyip Erdogan, Turkish media reports said

Photos from the scene showed a man being held down by police officers in ceremonial uniforms. The man was detained and taken to a police station inside the palace immediately after the attack.

İstanbul Police Chief Selami Altınok said the man was captured by the police officers after he threw two hand grenades at the guard station in front of the palace. The bombs did not detonate.

The police have defused the two hand grenades, according to Altınok. He told reporters that the assailant had been imprisoned in 2003-2006 but did not say on what charges and his identity was not revealed.

“The identity and links of the assailant is known to us. But we don’t want to reveal it right now,” Altınok said, adding that the police believe the assailant is a member of a “known terrorist organization.”

The state-run Anadolu news agency has said the assailant was a member of an outlawed leftist organization. It said in a news report published on its website that the man was taken to the police department’s counter-terrorism bureau for questioning.
Anadolu also said the man shot at the police officers after the hand grenade attack failed.

Altınok said the assailant was carrying an old long-range gun, a pistol and two hand grenades. No officers were injured in the attack, he also said.

Police briefly closed the road in front of Dolmabahçe Palace to traffic following the incident.

The 19th-century palace, which served as the main administrative center of the Ottoman Empire in its final years, today houses a prime ministerial office. Mustafa Kemal Atatürk, the founder of the Turkish Republic, died in a bedroom in the palace on Nov. 10, 1938.