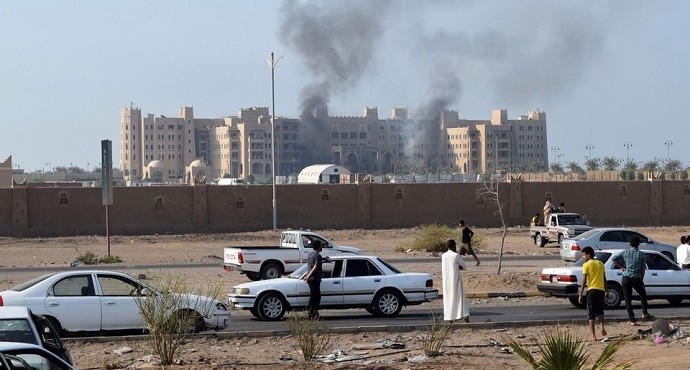 At least 15 people were killed in the attack Tuesday on the Al Qasr hotel, according to the United Arab Emirates’ official news agency WAM.

Four UAE soldiers were among the dead, the agency said. And the Saudi official press agency SPA said one Saudi soldier was killed.

Prime Minister Khaled Bahah and all of the Yemeni government officials were unharmed and were immediately evacuated from the hotel, Transport Minister Badr Basalma told CNN.

There were conflicting reports about the causes of the blasts, and no immediate claim of responsibility.

Yemeni government spokesman Rajeh Badi told the Associated Press that rockets were fired at the three locations from outside the city limits.

Fighting between the Houthis and forces loyal to Hadi has raged across the country, enabling terrorist groups like al Qaeda in the Arabian Peninsula and ISIS to exploit the security vacuum.

Almost 4,900 people, including 2,355 civilians, have been killed in coalition air strikes and fighting on the ground in Yemen over the past six months, according to the UN.