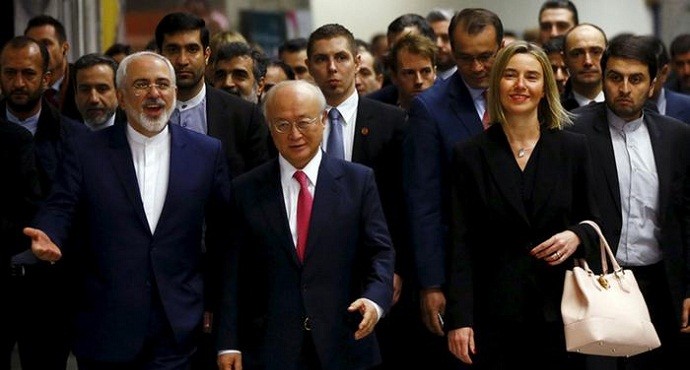 The European Union and the US have lifted their economic sanctions against Iran.

Iran’s economic isolation ended on Saturday when world powers lifted sanctions against the Islamic Republic in return for Tehran complying with a deal to curb its nuclear ambitions.

“Iran has carried out all measures required under the [July deal] to enable Implementation Day to occur,” the Vienna-based International Atomic Energy Agency (IAEA) said in a statement.

The UN nuclear watchdog said in a report released Saturday that Iran had complied with its obligations under a landmark nuclear deal reached with six world powers in July, paving the way for the lifting of sanctions. Mogherini read out a statement in English which was subsequently read out by Zarif in Persian.

“As Iran has fulfilled its commitments, today multilateral and national economic and financial sanctions related to Iran’s nuclear program are lifted in accordance” with the July deal, Mogherini said, adding that the deal was “strong and fair.”

#IranDeal at #ImplementationDay: a good day for security & diplomacy. Thanks to all those that made it possible https://t.co/V5B7jVu7HW — Federica Mogherini (@FedericaMog) January 16, 2016

“This achievement clearly demonstrates that with political will, perseverance, and through multilateral diplomacy, we can solve the most difficult issues and find practical solutions that are effectively implemented,” the statement added.

We’re getting to #ImplementationDay. Nothing serious. Diplomacy requires patience, but we all know that it sure beats the alternatives. — Javad Zarif (@JZarif) January 16, 2016

Iranian President Hassan Rouhani responded to the announcement by hailing the Iranian nation in a tweet for the “glorious victory.”

#ImplementationDay–I thank God for this blessing & bow to the greatness of the patient nation of Iran. Congrats on this glorious victory! — Hassan Rouhani (@HassanRouhani) January 16, 2016

Shortly after the press conference, US Secretary of State John Kerry confirmed that Washington had also lifted its sanctions against Iran. John Kerry, also present in Vienna, confirmed the IAEA’s report, saying that “The US sanctions-related commitments… are now in effect.”

Kerry said the United States would “immediately” remove sanctions imposed on Tehran, “expanding the horizon of opportunity for the Iranian people.”

The total worth of the US and EU sanctions is an estimated $100 billion (91.6 billion euros).

US President Barack Obama signed an order annulling previous executive orders that imposed further sanctions beyond the scope of the Congressional sanctions.

British Foreign Secretary Philip Hammond also hailed the deal’s implementation, describing it as an “important landmark” that made the “world a safer place.”

“The nuclear deal with Iran, in which Britain played a major role, makes the Middle East and the wider world a safer place,” Hammond said in a statement.

The announcements on Saturday came after the UN’s nuclear agency, the International Atomic Energy Agency (IAEA), confirmed that Iran had met commitments it made in last July’s landmark nuclear deal with six world powers.

The IAEA said its “inspectors on the ground verified that Iran has carried out all measures required under the [July deal] … to enable Implementation Day to occur.” IAEA Director General Yukiya Amano will visit Tehran on Sunday for meetings with the President of Iran, Dr Hassan Rouhani, and Vice-President and Chairman of the Atomic Energy Organization of Iran, Dr Ali Akbar Salehi. The discussions will focus on the IAEA’s role in verifying and monitoring Iran’s nuclear-related commitments under the Joint Comprehensive Plan of Action.

The IAEA said it had installed a device at the Natanz plant to monitor Iran’s uranium enrichment activities in real time, in order to verify that uranium enrichment levels were kept at up to 3.67% as agreed in the deal with world powers.

As part of the deal, Iran had to drastically reduce its number of centrifuges and dismantle a heavy-water reactor near the town of Arak, both of which could be used in creating nuclear weapons.