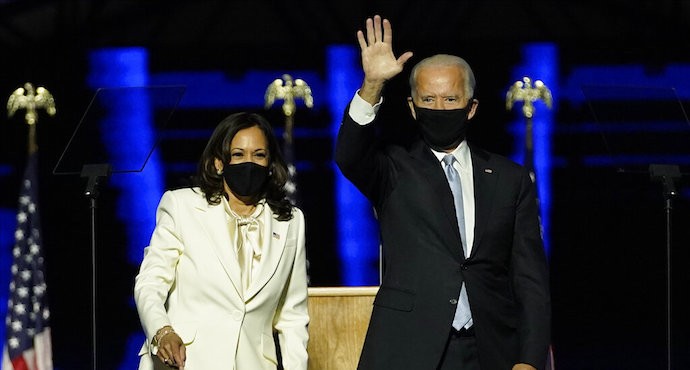 World leaders rushed to congratulate Joe Biden on winning a nail-biting US presidential election as soon as the U.S. media declared his victory.

The prime minister of the United Kingdom and Canada were among the first world leaders to break the silence. The messages of congratulations soon poured in for US president-elect Joe Biden from around the world. The European leaders particularly expressed hope, considering Biden’s victory a fresh start after years of strained ties under Donald Trump’s administration.

British Prime Minister Boris Johnson congratulated Biden “on his election as President of the United States and Kamala Harris on her historic achievement. “The US is our most important ally and I look forward to working closely together on our shared priorities, from climate change to trade and security.”

“Congratulations!” said Chancellor Angela Merkel. “I wish luck and success from the bottom of my heart. “Our transatlantic friendship is irreplaceable if we want to overcome the great challenges of our times,” she said in a tweet.

Prime Minister Justin Trudeau congratulates @JoeBiden and @KamalaHarris on their election as the next President and Vice President of the United States of America: https://t.co/TneYjyNBHB

French President Emmanuel Macron tweeted: “The Americans have chosen their President. Congratulations @JoeBiden and @KamalaHarris! We have a lot to do to overcome today’s challenges. Let’s work together!”

The Americans have chosen their President. Congratulations @JoeBiden and @KamalaHarris! We have a lot to do to overcome today’s challenges. Let's work together!

“Welcome back America!” Paris Mayor Anne Hidalgo tweeted Saturday, in one of the more enthusiastic responses to Biden’s victory.

“I look forward to working with both of you to further strengthen the special alliance between the US and Israel,” Netanyahu wrote on Twitter, referring to Biden and running mate Kamala Harris.

Congratulations @JoeBiden and @KamalaHarris. Joe, we’ve had a long & warm personal relationship for nearly 40 years, and I know you as a great friend of Israel. I look forward to working with both of you to further strengthen the special alliance between the U.S. and Israel.