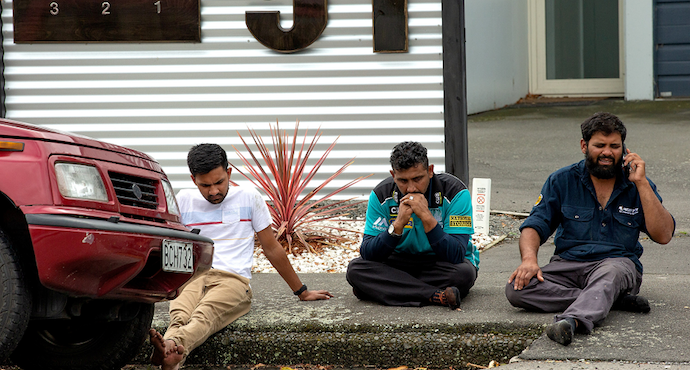 At least 49 people were killed and more than 20 seriously injured, according to New Zealand police.

A number of world leaders, diplomats and chiefs of global organization expressed their grief and shock on Twitter and extended prayers for the victims of attacks on two mosques in Christchurch, New Zealand.

There was anger all over the world where extra security measures were taken during the Friday prayers.

British Prime Minister Theresa May expressed her “deepest condolences to the people of New Zealand after the horrifying terrorist attack in Christchurch” and said: “My thoughts are with all of those affected by this sickening act of violence.”

On behalf of the UK, my deepest condolences to the people of New Zealand after the horrifying terrorist attack in Christchurch. My thoughts are with all of those affected by this sickening act of violence.

Sadiq Khan, the first Muslim mayor of London, said Londoners stood shoulder to shoulder with the people of Christchurch. “When the flames of hatred are fanned, when people are demonised because of their faith, when we play on people’s fears rather than addressing them, the consequences are deadly, as we have seen so sadly today” he said.

When the flames of hatred are fanned, when people are demonised because of their faith, when we play on people’s fears rather than addressing them, the consequences are deadly, as we have seen so sadly today.pic.twitter.com/2OZtYYCg0O — Sadiq Khan (@SadiqKhan) March 15, 2019

US president Donal Trump expressed his “warmest sympathy” to the people of New Zealand in a tweet:

My warmest sympathy and best wishes goes out to the people of New Zealand after the horrible massacre in the Mosques. 49 innocent people have so senselessly died, with so many more seriously injured. The U.S. stands by New Zealand for anything we can do. God bless all!

I blame these increasing terror attacks on the current Islamophobia post-9/11 where Islam & 1.3 bn Muslims have collectively been blamed for any act of terror by a Muslim. This has been done deliberately to also demonize legitimate Muslim political struggles. https://t.co/5bBREoayLz

I strongly condemn the terror attack against the Al Noor Mosque in #NewZealand and Muslim worshippers. May Allah have mercy on the victims and grant a speedy recovery to the wounded. — Recep Tayyip Erdoğan (@RT_Erdogan) March 15, 2019

In Muslim-majority Malaysia, Anwar Ibrahim, the leader of the biggest party in its ruling coalition, said one Malaysian had been wounded in the attack he described as a “black tragedy facing humanity and universal peace”.

“I am deeply saddened by this uncivilised act, which goes against humanistic values and took the lives of civilians,” he said in a statement. “We extend our deepest sympathies and condolences to the families of the victims and the people of New Zealand.”

Indonesia, the world’s biggest Muslim-majority country, strongly condemned the shooting as authorities were checking on whether any of its citizens were victims.
“The government and the people of Indonesia convey deep condolences to the victims and their families,” Foreign Minister Retno Marsudi said in a statement.

Australian Prime Minister Scott Morrison said: “Australians stand with all New Zealanders today during this dark time where hate and violence have stolen their peace and innocence. Kia kaha (stay strong)”, he declared on Twitter.

Australians stand with all New Zealanders today during this dark time where hate and violence has stolen their peace and innocence. Kia kaha (stay strong).

German Chancellor Angela Merkel expressed sorrow over the “citizens who were attacked and murdered out of racist hatred” in attacks on the mosques. “We stand together against such acts of terrorism,” Merkel said through her spokesman, Steffen Seibert, on Twitter, adding that the victims had been doing nothing more than “peacefully praying in their mosque”.

Norwegian Prime Minister Erna Solberg said the attack brought back memories of 2011 in her country when anti-Muslim extremist Anders Breivik killed 77 people: “It shows that extremism is nurtured and that it lives in many places.”

European Commission President Jean-Claude Juncker denounced the “senseless act of brutality” in a statement: “I offer my sincerest condolences to the loved ones of the victims and the community as a whole. We wish strength and courage to the injured and their families.” President of the European Council Donald Tusk commented on the attacks on social media:

Harrowing news from New Zealand overnight. The brutal attack in Christchurch will never diminish the tolerance and decency that New Zealand is famous for. Our thoughts in Europe are with the victims and their families. PM @jacindaardern can count on our solidarity. — Donald Tusk (@eucopresident) March 15, 2019

French president Emmanuel Macron condemned the “odious crimes against the mosques in New Zealand”. France’s Interior Minister Christophe Castaner said he had ordered regional prefects to send police patrols and reinforce surveillance on places of worship “as a precaution”.

Sweden’s Foreign Minister Margot Wallstrom tweeted that she was “shocked by the attack in Christchurch,” saying “we condemn terrorism in all forms.”

Spanish Prime Minister Pedro Sanchez said his thoughts were with the victims, families and government of New Zealand after an attack by “fanatics and extremists who want to destroy our societies.”