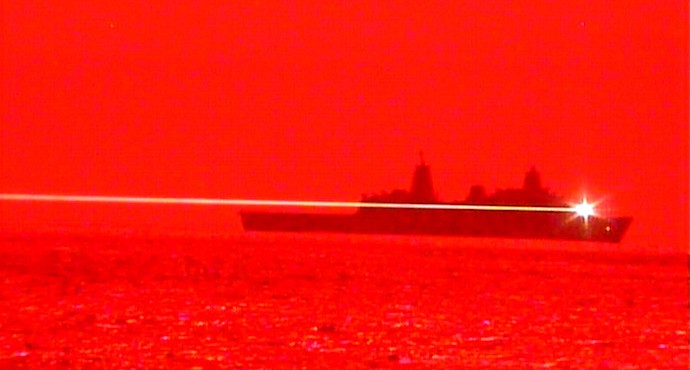 The Navy did not give a specific location of the test but said that it occurred in the Pacific on May 16.

This is “the first system-level implementation of a high-energy class solid-state laser” to disable a drone.

The impressive show of power is the latest advancement in the sphere of futuristic warfare. “With this new advanced capability, we are redefining war at sea for the Navy” said Capt. Karrey Sanders, commanding officer of Portland.

The LWSD “paves the way for future weapons systems,” he said.

The laser system was developed by Northrup Grumman. The development of LWSD provides immediate warfighter benefits and offers the commander increased decision space and response options.

“By conducting advanced at sea tests against UAVs and small crafts, we will gain valuable information on the capabilities of the Solid State Laser Weapons System Demonstrator against potential threats,” said Capt. Karrey Sanders, commanding officer of Portland.

The U.S. Navy has been developing lasers, which it calls directed-energy weapons (DEWs), since the 1960s to combat increasing threats including UAVs, armed small boats, and adversary intelligence, surveillance and reconnaissance systems.

In 2017, Navy conducted a live-fire exercise of a 30-kilowatt laser weapon aboard the amphibious transport ship USS Ponce in the Persian Gulf.