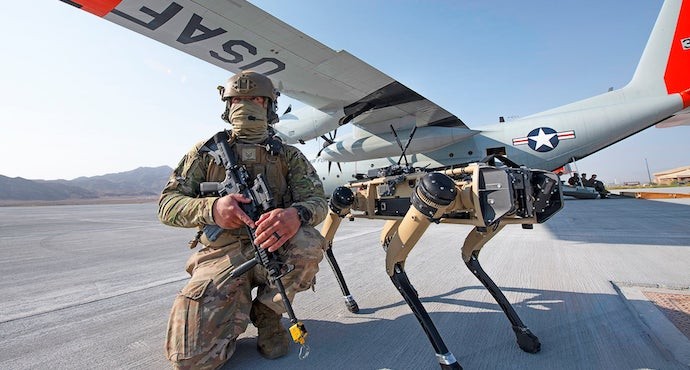 Four-legged robot dogs emerged out of the United States Air Force planes to augment base security.

The robot dogs were sent outside the aircraft to scout for threats before the soldiers would be exposed to them, according to USAF news release.

The Vision 60 robot, developed by Ghost Robotics, could play a key role in patrolling, scouting areas ahead of humans on the battlefield, investigating objects that could deadly to a soldier and providing provide data resources.

“Valuing data as an essential warfighting resource, one no less vital than jet fuel or satellites, is the key to next-gen warfare,” Will Roper, assistant secretary of the Air Force for acquisition, technology and logistics, said in an Air Force news release.

The robots were intended to be a part of Advanced Battle Management System (ABMS), an Air Force project designed to provide command, control, and sensor fusion for all services and possibly allied military forces.

ABMS, which is the top modernization priority for the Department of the Air Force, will be the backbone of a network-centric approach known as Joint All-Domain Command and Control (JADC2) which when fully realized will allow U.S. forces from all services and allies “to receive, fuse and act upon a vast array of data and information in all domains at the speed of relevance.”

“Modern warfare demands data and information at the edge, anywhere on earth,” said Chief of Space Operations Gen. John “Jay” Raymond. “Potential adversaries are investing heavily in these fields, and we must exploit new approaches to sustain the advantage” by exploring the use of JADC2 and ABMS to “link sensors to shooters across all battlespaces, at speed and under threat. Maturing these concepts and capabilities is necessary to fight and win in the information age.”