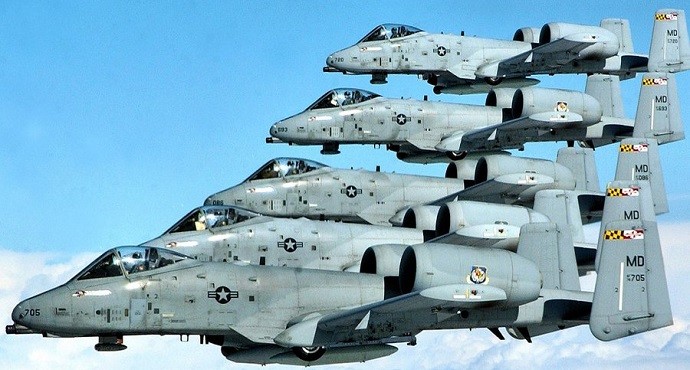 American warplanes have been participating in war games in Poland as part of a training mission for a massive NATO military drill amid tensions between Washington and Moscow over the Ukraine crisis.

Four US A-10 Thunderbolt II warplanes, capable of destroying tanks, are involved in a series of drills in the European country this week, the Associated Press reported.

He confirmed that the warplanes are training with Poland’s F-16 and Su-22 fighters over southern country.

The warplanes will fly to Germany on Friday.

Earlier this month, US military tanks also arrived in the country to participate in NATO’s Atlantic Resolve operation.

The drills are aimed at “reassuring NATO allies and partners of America’s dedication to enduring peace and stability in the region.”

The exercises, which will be conducted in various locations in Poland and the Baltic states, will involve troops from the United States, as well as Germany, Portugal, France, Denmark, Finland, Latvia, Lithuania and Estonia.

Poland, one of Washington’s closest allies in Europe, has formerly called for a permanent US military presence in the region over concerns for “Russian threat” in eastern Ukraine.

Polish Defense Minister Tomasz Siemoniak said on Wednesday that Poland hopes to host over 10,000 troops from ‘allied armed forces’ for participation in military exercises this year.

“We are striving for it and we are talking about it. We are preparing ground for the constant presence,” he said.

The US accuses Russia of destabilizing Ukraine by supporting pro-Russian forces in the eastern regions. Moscow, however, denies the allegation and warned that the military build-up near its borders would cause negative long-term impact.