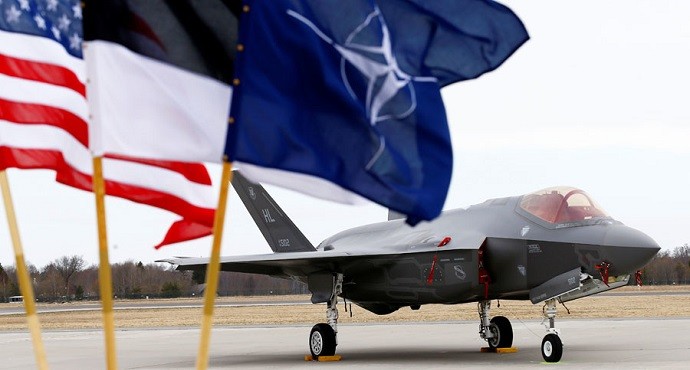 This symbolic gesture is meant to reinforce the United States’ commitment to the defense of NATO allies that border Russia.

“This is a very clear message,” Estonia’s Defense Minister Margus Tsahkna told Reuters. “The United States is taking the show of unity very seriously,” he said of the jets that are designed to avoid detection by conventional radar.

This is the first overseas flying training deployment for the F-35A, signifying an important milestone and natural progression of the Joint Strike Fighter Program.

“The deployment has been planned for some time, has no relations to current events and was conducted in close coordination with Estonian allies,” the Air Force said in a release Tuesday. “It allows the F-35A to engage in familiarization training within the European theater while reassuring allies and partners of U.S. dedication to the enduring peace and stability of the region.”

Air Marshal Stuart Evans of NATO’s Allied Air Command said the F-35s will be “the fundamentals” in the military alliance’s capabilities to defend the air sovereignty of its members.

Estonia, a former Soviet republic, shares an almost 200-mile-long border with Russia. Both Estonia and Romania are wary of Russian aggression following Moscow’s annexation of Crimea.

F-35s will also deploy to Romania, another current NATO member and former Warsaw Pact ally of the Soviet Union, the official said.

The deployment comes at a time of heightened tension with Russia after the U.S. missile strike against Syrian President Bashar Assad, an ally of Moscow.

The deployment to Estonia is part of a wider European Reassurance Initiative mission to reassure eastern NATO members who are wary of the intentions of Russian President Vladimir Putin after his invasion and annexation of Crimea in 2014, and his continued actions in eastern Ukraine.

The US Air Force (USAF) has previously deployed its Lockheed Martin F-22 Raptor air dominance fighter to Amari for this reason, and the arrival of its latest F-35A is designed to send a military and political message of United States and NATO resolve.