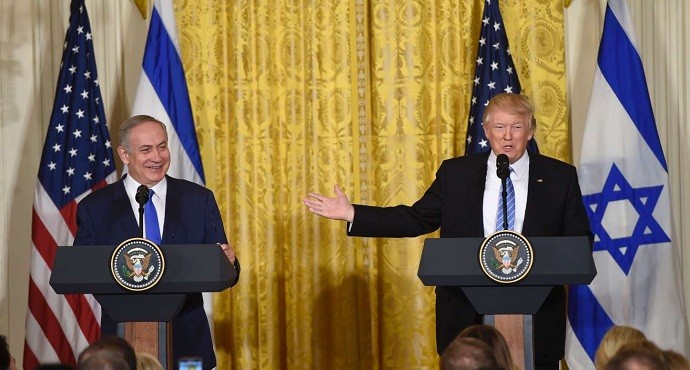 Trump backs away from the commitment to Palestinian state, calls on Netanyahu to hold back on settlements

U.S. President Donald Trump and Prime Minister Benjamin Netanyahu renewed the US-Israel partnership in defiance of international pressure for a two-state solution to the Israeli-Palestinian conflict.

President Donald Trump on Wednesday dropped a U.S. commitment to a two-state solution to the Israeli-Palestinian conflict, the hallmark of U.S. policy in the Middle East, as he urged Israeli Prime Minister Benjamin Netanyahu to curb settlement construction.

U.S. President Donald Trump told Prime Minister Benjamin Netanyahu during a joint press conference that he must show flexibility to prove he wants peace with the Palestinians. Trump said that he can live with either a two-state or one-state solution, adding that it’s up to both the Israelis and the Palestinians.

In the first face-to-face meeting since Trump’s victory in the 2016 election, Netanyahu asserted that a two-state solution can only happen under two conditions: The new Palestinian state must recognize Israel’s legitimacy, and Israel must maintain security control of the West Bank. And he suggested that the very “two-state” label was a hindrance to progress.

The one-state solution would include Israelis and Palestinians in a single, secular country with equal citizenship. The two-state solution calls for a negotiated settlement leading to a Palestinian nation alongside Israel, and it was the U.S. policy under both the Bush and Obama administrations.

Trump concluded by saying that the matter is up to Israel and Palestine to decide. “I’m happy with the one they like best,” he said.

This is for the first time, a U.S. president has shrugged off the two-state solution and expressed support for the possibility of turning Israel into a binational state.

The two-state solution has been a longstanding bedrock of Washington’s Middle East policy — and a source of friction between the Netanyahu government and Trump’s predecessor, President Barack Obama.