Home / Asia-Pacific / News / US and India can become ‘best partners': US President Obama 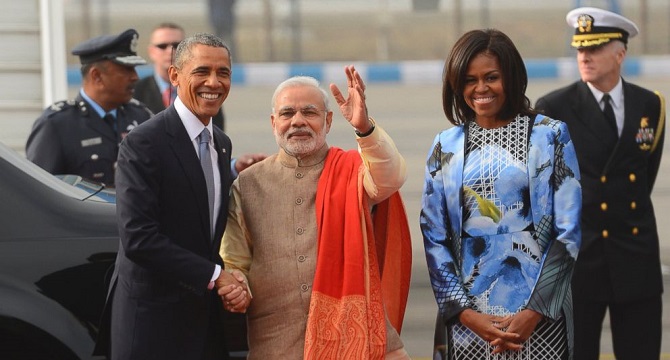 US President Barack Obama has said his country can become India’s “best partner” as he concludes a landmark three-day visit to Delhi.

But he stressed that climate change could not be reversed unless India embraced cleaner fuels.

Mr Obama was addressing an audience largely made up of students at a town hall meeting in India’s capital.

He said on Monday there was “much untapped potential” in the US-Indian economic relationship.

Some 2,000 people – mostly students and one of this year’s two Nobel Peace Prize winners, Indian child rights activist Kailash Satyarthi – cheered wildly as President Obama described relations between the two countries as the defining partnership of the 21st Century, says the BBC’s Sanjoy Majumder in Delhi.

“India and the United States are not just natural partners – I believe that America can be India’s best partner,” Mr Obama said.

“Of course, only Indians can decide India’s role in the world. But I’m here because I am absolutely convinced that both our peoples will have more jobs and opportunity, our nations will be more secure, and the world will be a safer and more just place when our two democracies stand together.”

But President Obama warned that the world does not “stand a chance against climate change” unless developing countries like India reduce dependence on fossil fuels.

He also spoke of the importance of religious tolerance and raised the issue of women’s safety and dignity.

And he said “every woman should be able to go about her day – to walk the street, or ride the bus – and be safe and be treated with the respect and dignity that she deserves.”

India has been criticised for its treatment of its women ever since a 23-year-old student was gang-raped and murdered on a bus in Delhi in December 2012.

On Sunday, the first day of his visit, Mr Obama and Indian Prime Minister Narendra Modi announced a breakthrough on a pact that will allow US companies to supply India with civilian nuclear technology.