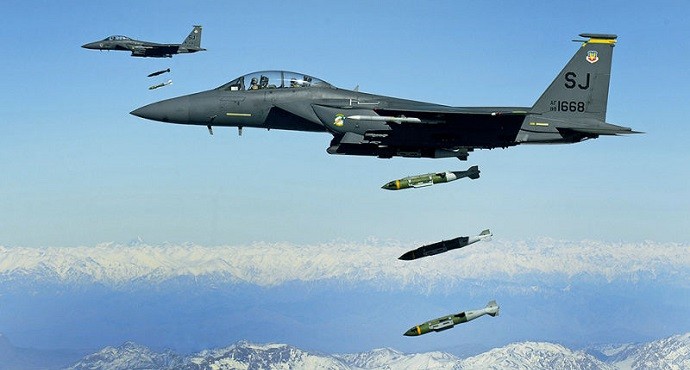 U.S. airstrikes in Somalia this weekend killed more than 150 militants at a training camp, the Pentagon said Monday.

The strikes were aimed at an al-Shabab training area where fighters were preparing to target U.S. and African forces.

An estimated 150 members of the Somali jihadist terror organization al-Shabab were killed on Saturday in an attack by drones and manned aircraft on a camp 120 miles north of Mogadishu, the Pentagon has announced. Spokesman Jeff Davis says al-Shabab is believed to have been on the verge of carrying out a “large-scale attack.”

The White House has also said it plans to disclose more details about its drone attack program. The weekend strike using both manned and unmanned drone aircraft targeted al Shabaab’s “Raso” training camp, a facility about 200 km north of the capital Mogadishu, the Pentagon said.

Navy Capt. Jeff Davis, a Pentagon spokesman, says the strike hit Raso Camp, killing more than 150 fighters. He says the U.S. was watching the camp for weeks before the strike and had gathered intelligence, including about an imminent threat posed by those in the camp.

“We know they were going to be departing the camp and that they posed an imminent threat to US and to Amisom, African Union mission in Somalia forces, that are in Somalia,” said Pentagon spokesman Captain Jeff Davis. Davis says the training camp, about 120 miles north of Mogadishu, was destroyed.

White House Press Secretary Josh Earnest said the Saturday airstrikes against the al-Shabab camp came as fighters there were scheduled to depart.

Earnest said the administration doesn’t yet have an assessment on whether the strike had any impact on civilians.

“Avoiding civilian casualties is a very, very high priority, both for moral reasons, but also because terrorist organizations like al-Shabab will just use that for recruiting purposes,” he said.

The al-Qaida-linked al-Shabab has been linked to a number of attacks, including the detonation of a bomb aboard a commercial passenger jet last month that forced the plane to make an emergency landing in Mogadishu.

Somalia’s Foreign Minister Abdusalam Omer said the Somali intelligence agency had provided information about the camp to the U.S. in the run-up to the attack. “There has to be intelligence on the ground for this to happen. Our intelligence had helped,” Omer told Reuters.

Omer said the U.S. drone strike was a major blow to al Shabaab. “It’s a big victory for fighting terrorism,” Omer said. “Instead of al-Shabaab attacking civilians, it was a military target was hit and there was a high success rate.”

Al Shabaab is Al Qaeda’s affiliate in Somalia and operates primarily out of the country’s southern and central regions. The group is fighting an insurgency against the internationally recognized Somali Federal Government, which is based in Somalia’s capital, Mogadishu.

The group, whose name means “The Youth,” frequently unleashes attacks targeting security and government targets, as well as hotels and restaurants in the capital.