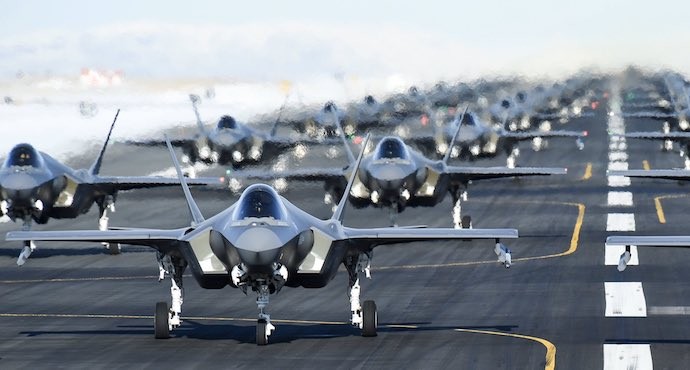 In a show of strength, U.S. Air Force staged a massive exercise including an elephant walk of 52 most advanced F-35A fighter jets at the base in Utah on January 6, 2020.

The exercise comes at a critical time amid rising tensions between the U.S. and Iran following the killing of Iran’s top General Qasem Soleimani by the U.S. in Iraq.

The Combat Power Exercise was conducted by 388th and 419th Fighter Wings at Hill Air Force Base as the fighter wings achieved full warfighting capability.

“This is just the beginning of sustained F-35A combat operations and we will remain focused on staying ready to deploy whenever, wherever we’re needed.”

Today we launched about 50 F-35s in rapid succession. Part of a long-planned combat power exercise with @388fw, we pushed the boundaries and tested our Airmen’s ability to deploy @thef35 en masse. We’re ready to fly, fight, and win. @usairforce @USAFReserve @USAF_ACC pic.twitter.com/QskjR6lsch

The Combat Power Exercise was aimed at testing readiness “in the areas of personnel accountability, aircraft generation, ground operations, flight operations, and combat capability against air and ground targets,” according to the Air Force.

‘We’re ready to fly, fight, and win,’ the 419th Fighter Wings tweeted after the exercise.

The primary mission of the 388th Fighter Wing is to maintain combat readiness to deploy, employ and sustain F-35A Lightning II aircraft worldwide in support of the national defense.

Hill is currently home to three F-35 fighter squadrons with a total of 78 aircraft.

What an awesome first day of practice over Utah @HAFB.