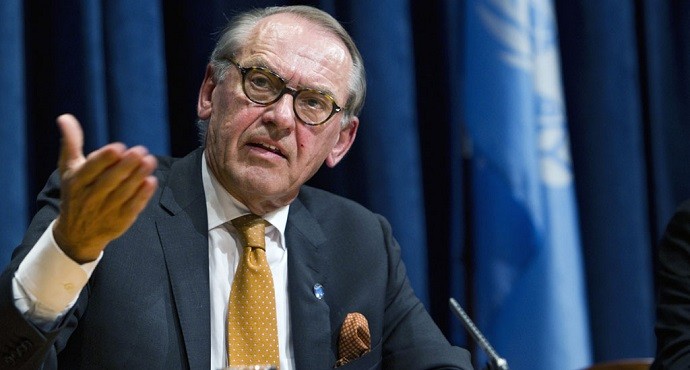 The United Nations deputy chief has blamed the Israeli regime for the escalation of violence across the occupied Palestinian territories.

UN Deputy Secretary General Jan Eliasson said on Thursday that the crisis in the occupied territories, including East Al-Quds (Jerusalem), is the result of Israel’s “stifling and humiliating occupation of Palestinian territories for almost half a century.”

Eliasson made the remarks in a briefing to the UN Security Council on the situation in the Middle East in a meeting chaired by Jose Manuel Garcia-Margallo, the foreign minister of Spain, which holds the 15-member body’s presidency for October.

During the meeting, the official also referred to Israel’s settlement constructions as one of the causes of the growing violence in the occupied territories.

“This crisis would not have erupted… if the Palestinian people had a perspective of hope towards a viable Palestinian state,” he stated.

“They see, instead, the growth of illegal settlements in the occupied West Bank, including East al-Quds, which… poses growing security risks to the Palestinian population,” the UN official stressed, adding, “They see the emergence of a parallel de facto settler community, with better infrastructure, better services and better security than in Palestinian populated areas.”

A Palestinian man is arrested by Israeli guards during clashes in the Palestinian refugee camp of Shu’fat in East al-Quds (Jerusalem) on October 5, 2015. ©AFP

He also warned Israel against any move to change the status quo of the al-Aqsa Mosque compound, slammed “the level of force used by Israeli security forces,” and called on Israeli authorities “to ensure a prompt and independent investigation into incidents where use of force has resulted in death or injury, and to ensure accountability where there is evidence of wrongdoing.”

The fresh wave of tensions was triggered by the Israeli regime’s imposition of restrictions on the entry of Palestinian worshipers into the al-Aqsa Mosque in August.

Palestinians are also angry at increasing violence by Israeli settlers who frequently storm the mosque, the third holiest site in Islam after Masjid al-Haram in Mecca and Masjid al-Nabawi in Medina. They say the Tel Aviv regime seeks to change the status quo of the compound.