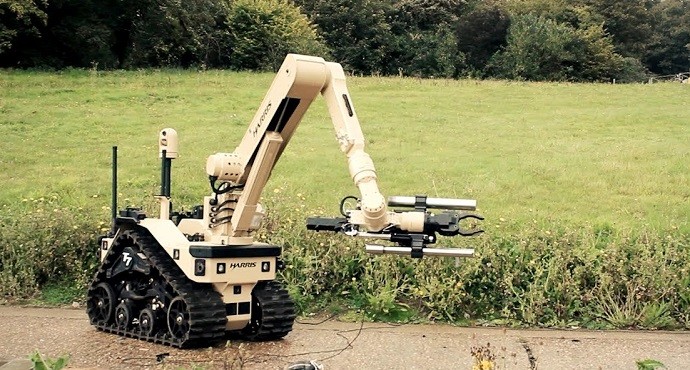 The United Kingdom has announced a 73 million U.S. dollar-contract for an army of bomb disposal robots.

The United Kingdom’s Ministry of Defence (MoD) has awarded Harris Corporation a contract worth up to £55 million ($70 million) to provide T7™ robotic systems to support U.K. explosive ordnance disposal (EOD) missions around the world.

Bitain’s Defense Secretary Michael Fallon told the Defense and Security Equipment International (DSEI) Exhibition in London that the deal had been inked for 56 robots.

In his speech, Fallon outlined how the Harris T7 robots use ‘advanced haptic feedback’ to allow operators to ‘feel’ their way through the intricate process of disarming from a safe distance, protecting UK personnel from threats such as roadside bombs.

“With our rising defence budget, we are investing in the latest equipment for our Armed Forces to tackle the growing threats we face. These bomb disposal robots will be companions to our troops on the battlefield,” said Defence Secretary Sir Michael Fallon.

The British Army is the first customer for Harris Corporation’s T7 robot, according to the British Ministry of Defence.

All 56 robots are due to be delivered and in service by December 2020, replacing the current Northrop Grumman Wheelbarrow Mk8B device as part of the MoD’s Project Starter. One of the key attributes of the T7 is the use of advanced haptic feedback from the robot arm to the remote control handgrip, giving operators the ability to feel their way through the sensitive process of neutralizing threats such as roadside bombs.