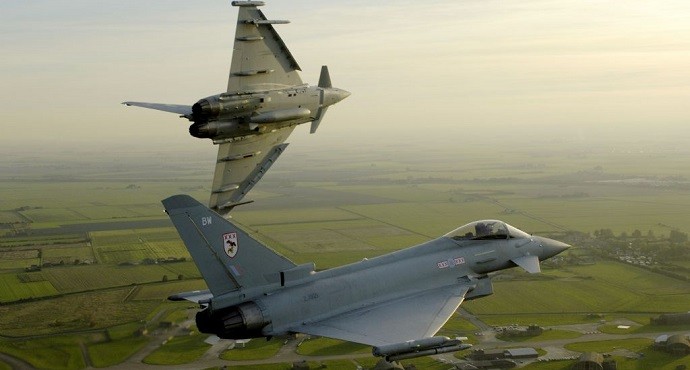 According to the British media, RAF jets shadowed the Russian aircraft after the planes “approached Baltic airspace without sharing a flight plan.”

The British jets took off from Amari Air base in Estonia on Monday.

British Defense Secretary announced that the interception of the Russian aircraft came as part of London’s commitment to NATO.

“The interception of Russian military aircraft by our RAF Typhoon fighters underlines our commitment to NATO and the security of the Baltic region…RAF air and ground crew are doing vital work to defend the skies above and around the Baltic States and I look forward to seeing that work first hand in the near future,” Michael Fallon said in a statement on Monday.

Also on Monday, the US Navy published a video showing two unidentified aircraft hovering over a NATO maritime exercise in international waters in Baltic Sea.

It was not immediately clear if the warplanes were the same jets intercepted by the British Typhoons.

Tensions have been escalating in the relations between Russia and the Western countries including the US and Britain over the crisis in Ukraine.

Earlier this month, British Foreign Secretary Philip Hammond announced that London is ready to mull hosting US cruise missiles to counter what he called “worrying signs” from Russia’s military plans.

“I think it is right to be concerned about the way the Russians are developing what they call asymmetric warfare doctrine … There have been some worrying signs of stepping up levels of activity both by Russian forces and by Russian-controlled separatist forces,” the British official said in reference to the pro-Russians in eastern Ukraine.

Russia has already rejected the allegations saying they are part of a campaign launched by certain countries aimed at spreading anti-Russian sentiments in the world.