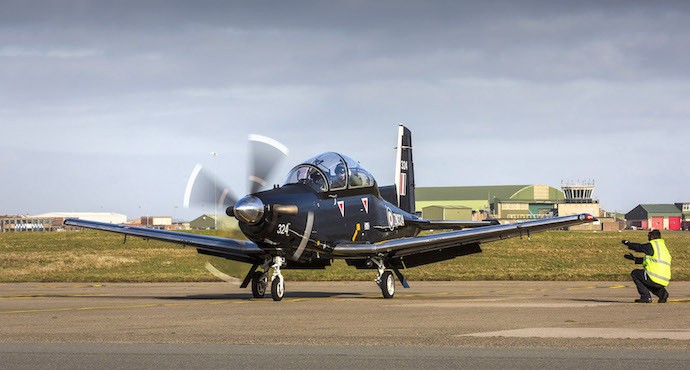 Britain’s Royal Air Force conducted the first test of the Texan T1 training aircraft Friday at the RAF Valley on the island of Anglesey, Whales.

Britain is investing $1.6 billion (£1.2 billion) in the Texan T1 aircraft under the Military Flight Training System (MFTS) to train and prepare junior pilots for the frontline.

“The introduction of the Texan T1 into one of NATO’s most advanced Fighter Pilot training programmes demonstrates the RAF’s commitment to investing in world-leading technology to maintain a military advantage over our adversaries” Defence Minister Stuart Andrew said.

He added that ” It’s crucial that our fighter pilots of the future train on the very best equipment before reaching the front line to protect UK airspace at home and defend our interests abroad.”

T1 would replace the Tucano to simulate missions in both 4th and 5th generation aircraft such as the F35 Lightning and Typhoon fast jets.

The personnel will begin training on the Prefect, before moving on to the Texan T1 and finishing flying the Hawk T2.

“The fighter pilots will train on world-leading aircraft. They start on the Prefect, move on to the Texan and finish on the Hawk T2, making the training process more efficient and far more representative of the aircraft types they will eventually fly. The Texan is the ideal lead-in trainer to the Hawk T2 advanced jet trainer that they will fly here at Valley.”

The first pilot to fly the aircraft in the UK said: “It was a privilege to be the first RAF pilot to fly a Texan T1 from an RAF station. The Texan is a great aircraft to fly, extremely capable and has the ability to better prepare students for the demands of modern fast jet flying than ever before. With the first flight now complete, the whole Texan team can begin looking forward to teaching students in the very near future.”

The Texas T1, a single-engine turboprop aircraft, will replace the Tucano. Eventually, 10 Texan T1s will become operational within the Ministry of Defense, according to Flight Global.