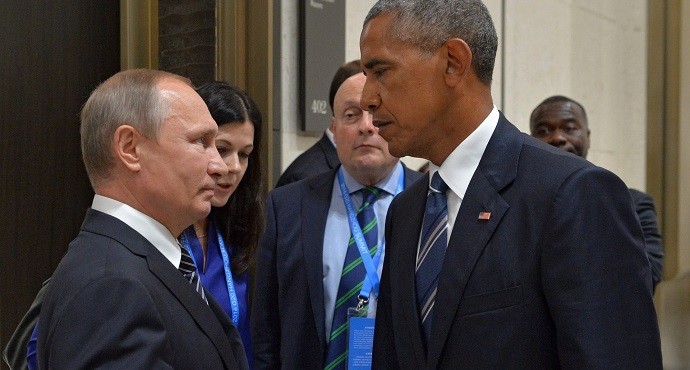 United States has expelled 35 Russian diplomats in retaliation for Russian efforts to interfere with the US presidential election 2016.

President Obama described those expelled as “intelligence operatives,” also announcing the closure of two Russian compounds, in New York and Maryland. This is one of the biggest diplomatic confrontations between Washington and Moscow since the end of the Cold War.

The Russian diplomats would be given 72 hours to leave US soil. They are expelled for acting in a “manner inconsistent with their diplomatic status,” the statement reads.

Obama said Americans should “be alarmed by Russia’s actions”, adding that “Using this new authority, I have sanctioned nine entities and individuals: the GRU and the FSB, two Russian intelligence services; four individual officers of the GRU; and three companies that provided material support to the GRU’s cyber operations.”

The FBI and the Department of Homeland Security (DHS) on Thursday released a joint report detailing how federal investigators linked the Russian government to hacks of Democratic Party organizations.

The 13-page report, known as a “Joint Analysis Report” or JAR, refers to the Russian hacking campaign as “Grizzly Steppe.”

The sanctions target Russia’s military intelligence agency, the Main Intelligence Directorate, or GRU, for “tampering, altering or causing the misappropriation of information” with the purpose or effect of interfering with the election. The sanctions impose asset freezes and travel bans on the individuals and prohibit U.S. citizens and companies from doing business with them.

Russia vows response to diplomat expulsion from US

Russia has promised to respond to the expulsion of its diplomats from Washington.

A spokesman for President Vladimir Putin said the Kremlin’s reaction would cause the US “significant discomfort”.

However, he hinted that Russia may wait until Donald Trump, who has played down the hacking claims, becomes president.

President-elect Donald Trump, who has expressed a desire to improve relations with Moscow, issued a statement that didn’t directly address the punishments meted out by the Obama White House. He said he will review the situation next week in a meeting with U.S. intelligence officials.

The expulsion of Russian diplomats appear to be the largest such action since 2001, when Washington ordered out 50 Russian personnel after the capture of Robert Hanssen, the FBI counter intelligence agent who had spied for the Soviet Union and then Russia for more than 20 years.