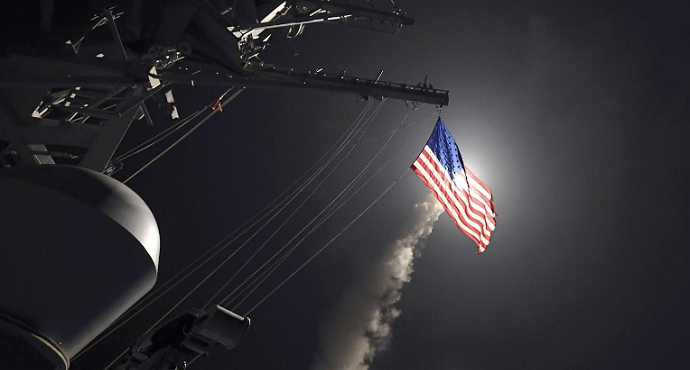 The U.S. launched cruise missiles against Syria Friday, a day after President Trump said a chemical weapons attack that killed at least 80 and “crossed many, many” lines.

It was the first direct American assault on the Syrian government since that country’s civil war began six years ago and Donald Trump’s most dramatic military order since becoming president.

The strikes hit the government-controlled Shayrat air base in central Syria, where U.S. officials say the Syrian military planes that dropped the chemicals had taken off. The U.S. missiles hit at 8:45 p.m. in Washington, early morning Friday in Syria.

Here’s video from the #Tomahawk launches against #Syria. For more on the story, visit https://t.co/2GprTQGGjs. pic.twitter.com/kB3gbBy4ma

The strike was “a proportional response to Assad’s heinous act,” the Pentagon spokesman said, noting that Shayrat Airfield was used to store chemical weapons and Syrian air forces.

According to Pentagon, the Russians were informed ahead of strike:

Russian forces were notified in advance of the strike using the established deconfliction line.  U.S. military planners took precautions to minimize risk to Russian or Syrian personnel located at the airfield.

About 59 Tomahawk missiles were launched from US Navy warships in the Mediterranean Sea, a US official said, speaking on condition of anonymity. A target was identified as an airbase in Homs.

“As always,” Davis said, “the U.S. took extraordinary measures to avoid civilian casualties and to comply with the Law of Armed Conflict.  Every precaution was taken to execute this strike with minimal risk to personnel at the airfield.”

The #USSPorter and #USSRoss fired #Tomahawk missiles into Syria in retaliation for the Assad regime using nerve agents against its people. pic.twitter.com/Ad908k3oIe

The chief of the General Staff of the Syrian Army, General Ali Ayyoub, said Washington has used the chemical attack in the northern town of Khan Sheikhoun earlier this week as a “pretext” to carry out the “blatant aggression”, without knowing what really happened. Syria blames the opposition fighters of stockpiling chemical weapons.

Russia calls the attack aggression against a sovereign state

Putin called the US strike an “aggression against a sovereign state in violation of international law,” the Associated Press reports.

A spokesperson for Russian President Vladimir Putin called the US strikes “aggression” and accused Trump of acting “under an invented pretext,” according to the Interfax news agency.