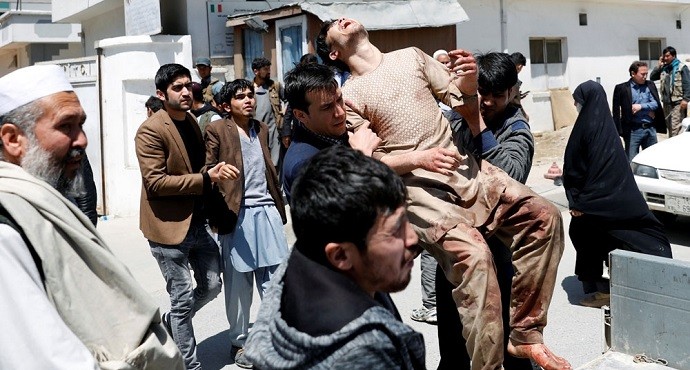 Bombings at voter registration centres in the Afghan capital, Kabul, and in Baghlan province have killed at least 63 people and wounded more than a hundred others, health officials said.

At least 57 people were killed — including at least five children — and 100 more were wounded in Kabul when a suicide bomber detonated his explosives at the doorway of an ID distribution centre in the city on Sunday, officials said.

The large explosion echoed across the city, shattering windows miles away from the attack site and damaging several nearby vehicles. Police blocked all roads to the blast site, with only ambulances allowed in.

Majro said there were five small children and 21 women among the dead. More than a dozen children and nearly 50 women were wounded, he said, adding that the tolls could still rise.

“They are civilians, including women and children,” said interior ministry spokesman Najib Danish.

“We’re fed up with this government to whom we ask for help,” Farooq Hussain said. “Our young generation and children are dying too early.”

Another witness to the attack, named Akbar, told Tolo TV: “Now we know the government cannot provide us security. We have to get armed and protect ourselves.”

A shocking #Photo from Kabul suicide attack scene, they were there to get ID cards and later register as voter for coming Parliamentary Election of #Afghanistan
Photo by @ZahraJoya pic.twitter.com/55dnyPD1LB

ISIS has claimed responsibility in a statement carried by its Aamaq news agency, saying it had targeted Shiite “apostates.”

In a message posted to Twitter, the nation’s chief executive Abdullah Abdullah condemned the attack. “I stand with those affected by this coward attack. Our resolve for fair and transparent election will continue and terrorists won’t win against the will of the Afghan people,” Abdullah said.

I strongly condemn the terrorist attack on voters’ registration center in Kabul. I stand with those affected by this coward attack. Our resolve for fair and transparent election will continue and terrorists won’t win against the will of the Afghan people.

President Ashraf Ghani said the Kabul attack and another reported in Pul-e-Khumri were “heinous terrorist attacks.”

I strongly condemn the attack on a voter registration centre in Kabul. #NATO stands with #Afghanistan in the fight against terrorism and for democracy.