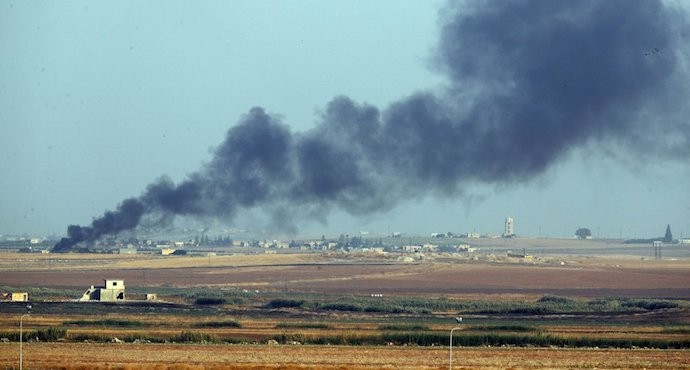 Turkish President Recep Tayyip Erdogan announced the start of the offensive in a Twitter message shortly after 4 p.m. local time. “The Turkish Armed Forces, together with the Syrian National Army, just launched #OperationPeaceSpring against PKK/YPG and Daesh terrorists in northern Syria,” he wrote, referring to the Syrian Kurdish force as well as the Islamic State.

The Turkish Armed Forces, together with the Syrian National Army, just launched #OperationPeaceSpring against PKK/YPG and Daesh terrorists in northern Syria. Our mission is to prevent the creation of a terror corridor across our southern border, and to bring peace to the area.

“Our mission is to prevent the creation of a terror corridor across our southern border, and to bring peace to the area,” he added. Erdogan’s government has advocated for the creation of a Turkish-controlled “safe zone” in northeastern Syria that it asserts could accommodate millions of Syrian refugees living in Turkey.

The move came after the United States announced it was withdrawing its troops from the region, effectively abandoning the Syrian Democratic Forces (SDF), its main ally in the battle against the Islamic State of Iraq and the Levant (ISIL or ISIS) armed group.

The SDF, led by the Kurdish People’s Protection Units (YPG), has denounced Washington’s move as a “stab in the back”.

A Syrian war monitor and a Kurdish activist collective say Turkish bombardment of northern Syria has killed at least one member of the Kurdish-led force.

Turkey’s state-run news agency says two mortar shells have been fired into a Turkish town, on the border with Syria. No one was hurt in the attack. Turkey’s operation in Syria is a “bad idea,” Trump says

President Donald Trump says the U.S. does not endorse Turkey’s assault on northern Syria and has made it clear to Ankara that it’s incursion against Kurdish fighters who helped the U.S. battle the Islamic State is a “bad idea.”

In a statement Wednesday, Trump said no American soldiers are in the area being invaded. Earlier, Trump ordered U.S. forces out of the area, prompting criticism that he was abandoning an American ally. The United Nations, the European Union and other world powers have expressed alarm over the Turkish action.

The secretary-general of NATO has urging Turkey not to “further destabilize the region” through its military action in northern Syria. Jens Stoltenberg told a news conference in Rome that Turkey, a NATO ally, “has legitimate security concerns,” having suffered “horrendous terrorist attacks” and hosting thousands of refugees. He said Turkey should act with “restraint” and any action should be “proportionate.”

Germany’s foreign minister also condemned Turkey’s offensive in northern Syria and called on Ankara to end the military action, saying it threatened “a further humanitarian catastrophe and further displacement of persons.” Foreign Minister Heiko Maas said in a statement that “we condemn the Turkish offensive in the northeast of Syria in the strongest possible terms.”