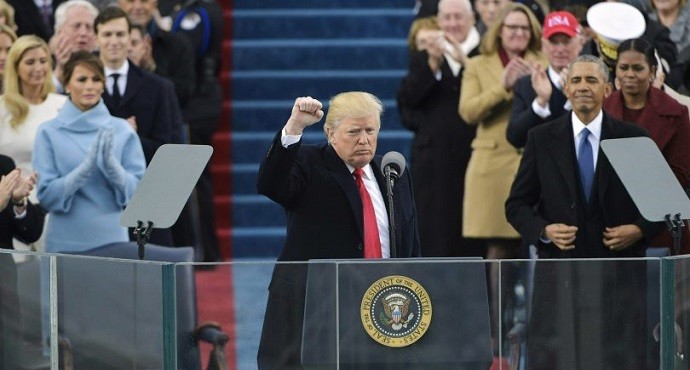 US President Donald Trump signed his first bill into law, moments after being sworn in

Donald J. Trump became the 45th President of the United States on Friday, vowing to take power away from Washington elites and always put “America first”.

In his first words to the nation and the world after being sworn in, President Trump depicted the United States as a land of overrun by poverty, gangs, abandoned factories, economic angst, rising crime and dystopian “carnage.” He promised a new era in American politics. “January 20th, 2017, will be remembered as the day the people became the rulers of this nation again,” the 45th president declared.

“We have defended other nations’ borders while refusing to defend our own, and spent trillions and trillions of dollars overseas while America’s infrastructure has fallen into disrepair and decay,” he said. “We have made other countries rich while the wealth, strength and confidence of our country has dissipated… [T]he wealth of our middle class has been ripped from their arms and redistributed all across the world.”

Toward the end of his remarks, Trump appealed for unity and solidarity.

More than 200 arrested, charged with rioting in DC

Thousands of protesters filled the streets of Washington DC, in mostly peaceful demonstrations that contrasted sharply with the thin crowds watching the inaugural parade.

More than 200 people were arrested after violence broke out in Washington, D.C., police said, when some protesters threw bricks and bottles at police and officers fired pepper spray and stinging projectiles in return. At least six police officers were also injured.

Washington braced for far larger protests planned for Saturday, including a Women’s March that expects more than 200,000 people. Protestors run as riot police throw stun grenades at the inauguration of Donald Trump on January 20, 2017 in Washington, D.C.

President Donald Trump signed his first bill into law Friday, moments after being sworn in, clearing the way for his defense secretary to be confirmed.

The bill passed by Congress earlier this month would allow retired Gen. James Mattis to serve as defense secretary by waiving the legal requirement that he be out of the military for seven years before doing so, according to White House press secretary Sean Spicer.