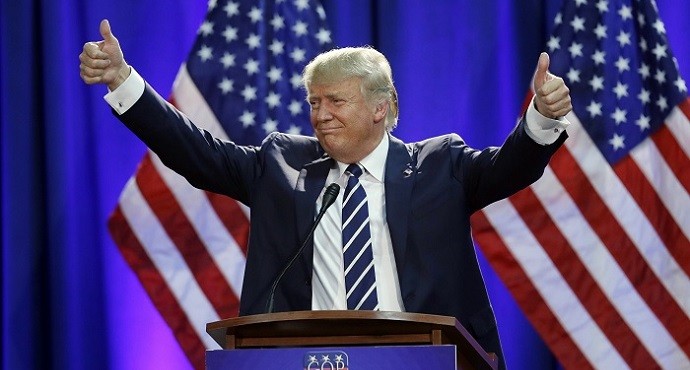 US President Donald Trump’s first budget proposal is to increase military spending by $54 billion by cutting funding across the rest of the government, including international aid programs, the White House said.

“This is a landmark event and a message to the world in these dangerous times of American strength, security and resolve,” Mr Trump said.

The Republican president, who is expected to release his final budget proposal in mid-March, said the spending hike would help rebuild the country’s “depleted military” – which already receives for more than a third of the world’s total military expenditure.

“We must ensure that our courageous servicemen and women have the tools they need to deter war and, when called upon to fight in our name, only do one thing — win,” he added. “We have to win.”

The defense boost would be balanced by slashing the same amount from non-defense spending, including a large reduction in foreign aid, the White House budget official said.

“President Trump intends to submit a defense budget that is a mere 3 percent above President (Barack) Obama’s defense budget, which has left our military underfunded, undersized, and unready to confront threats to our national security,” John McCain, the Republican chairman of the Senate Armed Services Committee, said in his statement.

A White House budget official, who outlined the plan on a conference call with reporters, said the administration would propose “increasing defense by $54 billion or 10 percent” which represents the magnitude of the increase over budget caps Congress put in place in 2011.

About one-sixth of the federal budget goes to military spending.

An official familiar with the proposal said Trump’s request for the Pentagon included more money for shipbuilding, military aircraft and establishing “a more robust presence in key international waterways and choke points” such as the Strait of Hormuz and South China Sea, according to Reuters.

If Mr Trump’s request is approved, it would be the biggest increase in defence spending since a 10 per cent jump in 2008 and a 12 per cent increase in 2007, according to the Committee for a Responsible Federal Budget, a Washington-based watchdog group.

Pres. Trump to request $54B increase in US defense spending.

Reminder of US defense budget vs. rest of the world.https://t.co/Q0V25k7rdw pic.twitter.com/PCMfYkhdNg