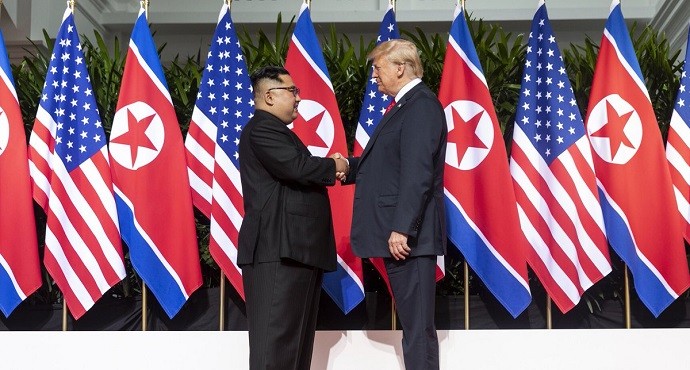 The U.S. and North Korea agreed to seek complete denuclearization of the Korean peninsula following a historic summit between President Donald Trump and Kim Jong Un, yet the accord set no deadline and left the path to disarmament undefined.

Trump defended the two-page document he signed with Kim at the end of their meeting in Singapore earlier Tuesday, saying that he thinks his North Korean counterpart will live up to it. “It’s very comprehensive,” the president said. “It’s going to happen.”

The signing ceremony was held after a four-hour summit in Singapore aimed at easing decades of tensions between adversaries that only last year seemed on the brink of nuclear war. Trump hailed the summit as a “very important event in world history”, claiming Kim has given his “unwavering” commitment to dismantle its “very substantial” nuclear arsenal.

Trump and North Korean leader Kim Jong Un on Tuesday signed an agreement that “reaffirmed his firm and unwavering commitment to complete denuclearization of the Korean Peninsula.”

During the signing ceremony, Kim said the agreement “heralds a new start, leaving the past behind.” He added: “the world will witness a major change now.” He left the summit site before Trump’s news conference and didn’t address reporters on his own.

Speaking at a news conference after the summit and the signing of a joint statement, Mr Trump said the United States will stop the annual war games with South Korea, which North Korea opposes.

But sanctions on North Korea will remain till complete denuclearisation takes place, which he said could take a long time.

The US and North Korea also agreed to recover the remains of prisoners of war from the conflict between North and South Korea, and the immediate repatriation of those already identified.

China welcomed the summit as historic and said the international community could consider lifting sanctions.

South Korea said the summit would usher in a “new chapter in peace and cooperation”.