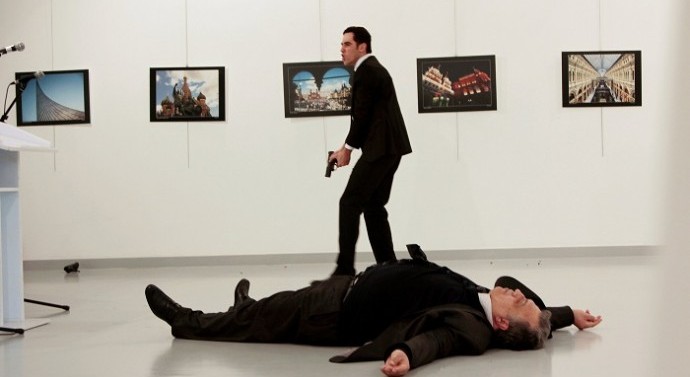 Europe and Middle East have been left reeling after a night of terror that has left several people dead and many severely wounded. Fatal attacks by apparent terrorists occurred Sunday and Monday in the cities of Berlin, Ankara, Karak and Zurich.

12 killed as truck ploughs through crowd at Berlin Christmas market

A truck slammed into a crowded Christmas market in central Berlin on Monday night, killing at least 12 people and wounding 48.

The incident took place at the Christmas market at the Kaiser Wilhelm Memorial Church near the Zoologische Garten train station in the western part of the city. The popular Christmas market was filled with a mix of tourists and locals when the large Scania truck hurtled into it.

The Berlin truck attack evoked scenes of Nice, France, where a truck drove into a crowd in July, killing over 80 people. In the Turkish capital of Ankara, a man assassinated the Russian ambassador to Turkey while visiting an art exhibition opening.

The gunman, described by Turkish officials as a 22-year-old off-duty police officer, also wounded at least three others in the assault on the envoy, Andrey G. Karlov, which was captured on video. Turkish officials said the assailant was killed by other officers in a shootout.

President Vladimir V. Putin of Russia said on Russian television that Mr. Karlov had been “despicably killed” to sabotage ties with Turkey. Mr. Putin spoke with the Turkish president, Recep Tayyip Erdogan, by phone, and the two leaders agreed to cooperate in investigating the killing, and in combating terrorism broadly. A man, reported by The Associated Press to be the gunman, after the shooting of the Russian ambassador, on the floor, on Monday at a gallery in Ankara, the capital of Turkey. Credit Hasim Kilic/Hurriyet, via Reuters

Two of the three men — aged 30, 35 and 56 — were seriously injured in the attack shortly after 5:30 p.m. local time (1630 GMT) near the main train station in Switzerland’s financial capital.

The unidentified suspect, a man around 30 years old who according to witnesses was wearing dark clothing and a dark wool cap, fled the mosque, police said.

Two thirds of Switzerland’s 8.3 million residents identify as Christian but the nation has been wrestling with the role of Islam as its Muslim population has risen to 5 percent, swelled by the arrival of immigrants from the former Yugoslavia. Policemen secure the area in front of the Islamic centre after a shooting in Zurich. Photo: Ennio Leanza/EPA

At least 10 die in Shootout at Crusader Castle in Jordan

On Sunday, Jordanian security forces freed foreign tourists trapped inside a medieval castle in the central city of Karak, following attacks by gunmen that left at least 10 people dead.

Four gunmen were killed by security forces, reports the Jordan Times, after an hours-long operation to free people trapped in the castle.

At least 34 people, including two foreign nationals, were wounded in the day’s violence, which was one of the bloodiest attacks in Jordan in recent memory. Jordanian policemen leave after ending security operations in the vicinity of the Crusader castle, where armed gunmen carried out attacks that killed a woman from Newfoundland. Photo: Muhammad Hamed/Reuters