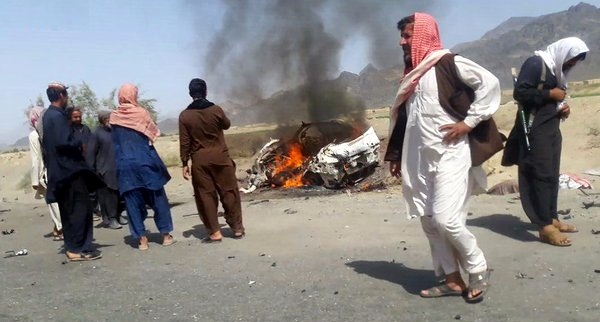 Taliban leader Mullah Akhtar Mansour has been killed in a US drone strike. This claim by US officials has now been confirmed by Afghan government and intelligence agency.

Mansour and another Taliban combatant were reportedly killed by the airstrikes from multiple U.S. drones that struck a vehicle in which they were riding in a remote area of Pakistan, southwest of the town of Ahmad Wal, Reuters.

“The Department of Defense conducted an airstrike that targeted Taliban leader Mullah Mansur in a remote area of the Afghanistan-Pakistan border region” Pentagon Press Secretary Peter Cook said in a statement.

“We are still assessing the results of the strike and will provide more information as it becomes available,” Peter Cook added.

Mansour “has been an obstacle to peace and reconciliation between the Government of Afghanistan and the Taliban, prohibiting Taliban leaders from participating in peace talks with the Afghan government that could lead to an end to the conflict,” a Pentagon statement earlier Saturday said.

Earlier, one of the Taliban commanders, Mullah Abdul Rauf has confirmed that Mansour died in the strike late Friday night, AP reported.

Afghanistan government and spy agency, Afghan National Security Directorate (NDS), has confirmed that Taliban leader Mansour has been killed in the Dalbandi area of Balochistan province. This is the first official confirmation of the killing of the Taliban leader.

However, there is confusion about the place of drone target. Afghanistan agency claims the drone targeted Mansour’s his vehicle in Dalbandin area of Pakistan’s Balochistan province, which is 2-hours drive away from Ahmad Wal – the place of target reported by Reuters.

President of Afghanistan, Ashraf Ghani, while confirming the death of Mullah Mansour in his tweet, also urged other Taliban members to end bloodshed and join the peace talks.

In the event of Mullah Mansour’s killing, a new opportunity presents itself to those Taliban who are willing to end war & bloodshed. (7/n)

Mansour officially replaced Mullah Omar, the founder of the Taliban, as the group’s emir in August 2015 when Omar’s death was disclosed.

Sen. John McCain, chairman of the Senate Armed Services Committee, welcomed news of Mansour’s possible death Saturday and said, “I hope this strike against the Taliban’s top leader will lead the administration to reconsider its policy of prohibiting U.S. forces from targeting the Taliban.”

The timing of the strike was significant as the Afghan government warned it would take action against the group for not participating in the peace talks. “If it is proved that Mullah Mansour has died in the strike, it would be a major blow to the Taliban” Al Jazeera noted.

Who is Mullah Akhtar Mansour?