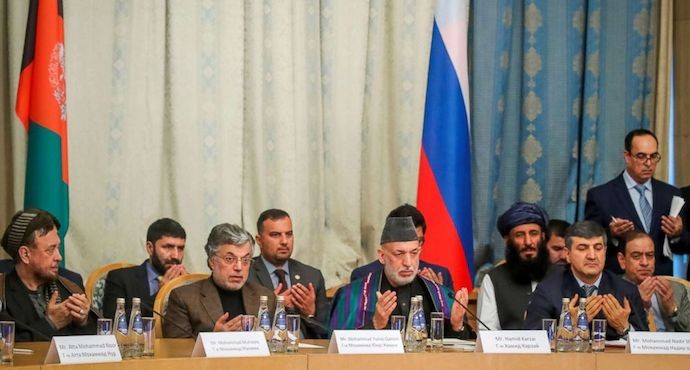 For the first time in recent past, the Taliban and top Afghan groups, who have fought against each other on the battlefield, talked, ate and prayed together at the historic talks in Moscow.

No major breakthroughs were announced but the fact that meeting was successfully arranged was itself a success.

The gathering was the second time Moscow has hosted high-level talks on Afghanistan attended by the Taliban in recent months. The talks are followed by negotiations between the US and the Taliban in which both sides agreed to a draft framework for a deal to pave the way for peace talks.

The two-day talks were attended by around 70 political and social leaders from Afghanistan, among them former president Hamid Karzai, who said they hoped it could build trust and lay a foundation for a future political settlement that might help end the 18-year war.

The delegation from Kabul included a former president, Hamid Karzai, while Taliban’s lead negotiator was Sher Mohammad Abbas Stanikzai who described the meeting as “very successful – we managed to agree on a lot of points”. The current Afghan government did not attend the meeting.

The peace talks’ location in Moscow also underlined Russia’s renewed involvement in Afghan affairs and the conference’s organizers said Russia was able to act as an impartial moderator for Afghans. The Taliban delegation thanked Russia for facilitating the meeting and said Russia was playing an important role.

Thw delegates attending the peace talks in Moscow on Wednesday issued a joint declaration in which they outlined a nine-point approach to promote “intra-Afghan” dialogue aimed at finding a political settlement to the conflict in the country.

The declaration read as follows:

• All parties in this conference have agreed that a dignified and lasting peace is the aspiration of all the people of Afghanistan and this principle has been achieved in Moscow.

• All parties agreed that in view of the current sensitive situation, the intra-Afghan dialogue must continue on regular basis.

• All parties agreed to support the ongoing talks in Qatar and consider these talks a positive step towards ending the imposed war on Afghanistan.

• All parties agreed that the values such as respect for the principles of Islam in all parts of the system, the principle that Afghanistan is a common home to all Afghans, support to a powerful centralised government with all Afghan ethnicities having a role in it, protecting national sovereignty and promoting social justice, to keep Afghanistan neutral in all regional and international conflicts, protecting Afghanistan’s national and religious values and undertaking a unified and single policy.

• All parties agreed that to determine lasting peace in Afghanistan, the following points are important : the complete withdrawal of foreign forces from the country, asking all countries to avoid interfering in Afghanistan’s internal affairs, providing assurance to the international community that Afghanistan will not be used against any other nation, protection of social, economic, political and educational rights of the Afghan women in line with Islamic principles, protection of political and social rights of the entire people of Afghanistan and protection of freedom of speech in line with Islamic principles, undertaking efforts for attracting international assistance for the reconstruction of Afghanistan’s infrastructure.

• All parties agreed that in order to create the atmosphere of trust and promote peace, in the first step, it is important that these items are taken into consideration, tackling the issue of all those inmates who are old, or suffering uncurable diseases or have completed their prison sentences and the removal of leaders of the Taliban from the UN blacklist, opening of an official political office in Qatar for acceleration of peace talks.

• All parties agreed that the next intra-Afghan meeting to be held in Doha, Qatar as soon as possible. The agreement was also made to work further on some other important issues related to the peace process in Afghanistan.

Taliban official on Wednesday said the US has promised to withdraw half of its troops from Afghanistan by April. But this claim was immediately disputed by the US State Department.

The official, Abdul Salam Hanafi, made the comments in Moscow where he was part of a Taliban delegation.”The Americans have agreed to us that half of American forces will start leaving from beginning of February till end of April,” Hanafi told reporters Wednesday, saying the promise had been made during breakthrough talks with US in Doha last month.

However, Pentagon spokesman Army Colonel Rob Manning said the US military had received no orders to begin withdrawing. “Peace talks with the Taliban continue, but [the Defense Department] has not received a directive to change the force structure in Afghanistan,” said Manning.