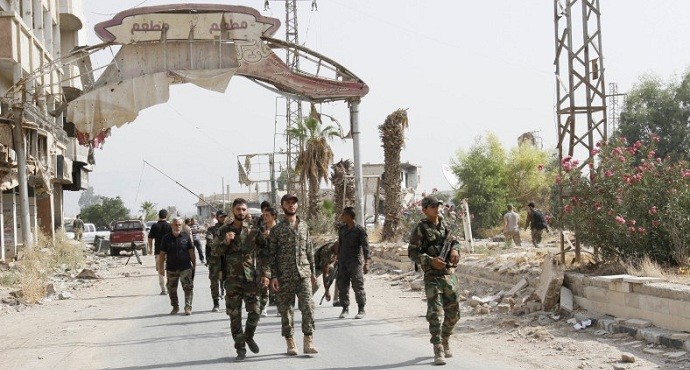 Syrian army and rebels agree to end 4 years of Darayya siege after a deal. Civilians and rebels evacuate Darayya

Rebels and Syria’s army agreed a deal on Thursday to evacuate all residents and insurgents from Darayya, a rebel leader and state media said, ending one of the longest stand-offs in the country.

Approximately 700 fighters will head to rebel-held Idlib after surrendering their weapons, according to Syria’s SANA state news agency.

“The Syrian army completely controls Darayya and has entered all of the town. There isn’t a single armed man there,” the source said of the insurgents, speaking on condition of anonymity.

State television said: “The Darayya file is now closed after the evacuation of all the civilians, armed men and their families under the agreement,” reached on Thursday between the regime and rebels. Syrian soldiers celebrate victory in the town of Darayya near Damascus, capital of Syria, on Aug. 26, 2016. Photo: Xinhua/Yang Zhen

A Beirut-based television, Al-Mayadeen, aired footage of soldiers taking pictures with their mobiles of buses loaded with rebels, who were allowed to keep their personal weapons under the deal.

“With our blood and our souls, we sacrifice ourselves for you, O Bashar!” soldiers chanted of President Bashar al-Assad as the buses drove by.

About 8,000 civilians and 800 rebels would be evacuated from the Damascus suburb, which, before the war, was home to a quarter of a million people.

Residents were suffering from severe shortages and malnutrition prior to the aid deliveries, according to local activists.

This ends the years-long standoff in one of Syria’s most desperate places. Darayya, just 15 minutes from Damascus, was one of the first towns in Syria to rise up against Assad’s government and became a symbol of Syria’s 2011 uprising.

Darayya, like Homs, has been a symbol of revolt since the earliest peaceful protests against President Bashar al-Assad in 2011 as leaders of the civilian opposition hailed from Darayya, and many of them were imprisoned, with some tortured to death while in custody. The ultimate fall of the rebellious town now symbolizes the failure of the moderate opposition rooted there and those affiliated with the early civilian protests to firmly unite fractured rebel groups. In 2012, several hundred people were killed in Darayya, including civilians, many execution-style, when security forces stormed the suburb after locals took up arms.

According to the UN, nearly 600,000 live under siege across Syria, most surrounded by government forces.

UN says it was ‘not consulted’ on deal

The UN, which has repeatedly called for the lifting of the siege, said it was “not involved and not consulted in this deal”, in a statement put out by the UN Special Envoy to Syria Staffan de Mistura’s office.

De Mistura, who met with the US Secretary of State John Kerry and Russian Foreign Minister Sergey Lavrov in Geneva on Friday, said the situation in Darayya was “extremely grave and tragic” and that “the repeated appeals to lift the siege of Darayya have not been headed”.